We snatch a victory in the fourth overtime and lead the series – 3:0

We snatch a victory in the fourth overtime and lead the series – 3:0

126 minutes 34 seconds is the second longest match in the history of the KHL. 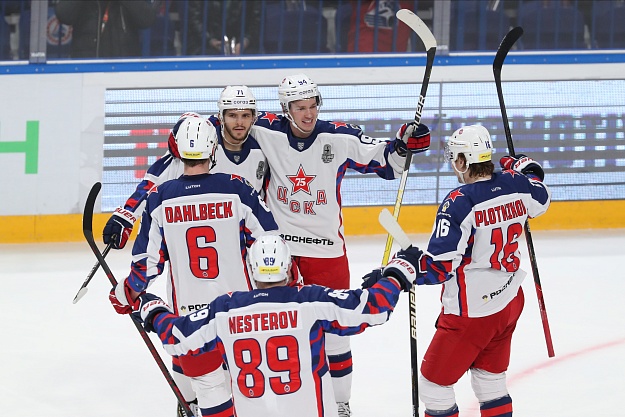 CSKA arrived in Yaroslavl after a confident victory on their own court (4:1) and leading the series with a score of 2:0. At Arena-2000, the home team surged forward from the beginning. But the Army team didn't plan to stay on the defensive and kept moving quickly through the middle zone.

At the 5th minute, the army remained in the minority. And at the end of two minutes Yaroslavl managed to realize the majority. The account was opened by Pavel Kraskovsky. Just a minute and a half later, however, Kamenev won the throw-in on the left circle and Konstantin Okulov put the puck under the crossbar, making it 1-1.

For the second game in a row, the Red and Blue quickly regained the lead after conceding a goal at the start of the game. Before the break, there was an equal game on the court. In the end, the guests were outnumbered. But they were able to stand, keeping their gates intact.

In the debut of the second game segment, CSKA earned the majority. Grigorenko and Kamenev threatened the goal of Isayev, who replaced Pasquale after the second game of the series. But they couldn't break through the goalkeeper. After that, the Army team was again outnumbered, and soon after a mutual penalty, the teams played three-on-four. Lokomotiv took a few tricky shots on Fedotov's possessions, but our team's goalie was reliable.

At the end of the period, the teams played for three and a half minutes without stopping. Okulov interrupted the game time. The forward scored again from the left tackle circle, hitting the far corner and earning a double-double, the Muscovites leading 2-1.

The third twenty-minute was started more actively by the "railwaymen", driven by the stands. And we earned another big one in this match. But Sergey Fedorov's team did not allow the opponent to create anything dangerous in their own zone.

When playing in equal squads, the army had a powerful segment. Okulov was close to a hat trick, but the selfless actions of the Lokomotiv players prevented the puck from crossing the goal line. Then Nesterov threw from afar – Isaev helped out in this episode.

At the end of the game, emotions ran high and fistfights began to break out on the ice. The Red and Blue once again tested their fans' nerves, fighting back in four-on-five fashion. Lokomotiv's stellar defense, however, prevented them from posing a serious threat to Ivan Fedotov's field goal.

In the 55th minute, CSKA earned the third majority in this game. Okulov took a dangerous shot, the goalie saved it, and then he saved Karnaukhov's shot.

Two minutes before the end of regular time, the home team got the majority again and immediately took a timeout. And a minute later, Lokomotiv was still able to put the game into overtime thanks to Maxim Shalunov's goal.

In the first minutes of extra time, the railroaders began to storm the Red and Blue's goal. The guests were saved twice by Fedotov, who showed a good reaction. The visitors answered with an attack in which Okulov shot into the near corner. But Isaev was on the spot.

Toward the middle of the fourth quarter, CSKA seized the initiative and became more and more dangerous with each attack. At the end of the first overtime period, the Muscovites looked fresher than the Yaroslavl team, but the score remained unchanged.

The home team again got off to a strong start in the second overtime period and the fifth, but then the Army team leveled the game. Fedotov continued to show his skills. Three and a half minutes before the buzzer struck in the fifth quarter, CSKA was down by one. But I was able to survive thanks to a selfless game.

For the sixth period, this time the Red and Blue started at number one. As in the second overtime, hockey players on both teams tried to act very carefully in their own zone. And in the zone, they gave all their strength to the attack. Not even all the fans were able to withstand the match to the end and the stands got a little bit.

Midway through the third overtime, the Muscovites got their chance - they earned a power play. But Yaroslavl residents were able to fight back.

We went to the team record, the game reached the seventh period. In the seventh minute, CSKA was awarded a power play and converted 30 seconds later. Maxim Sorkin scored the winning goal in this match. The Army team wins the marathon game and takes a 3-0 lead in the series.

This game was the second-longest in KHL history. The hockey players spent 126 minutes and 34 seconds of pure time on the ice.

The fourth match of the series will take place on March 7.