A shutout win in the "Spartak" derby

A shutout win in the "Spartak" derby 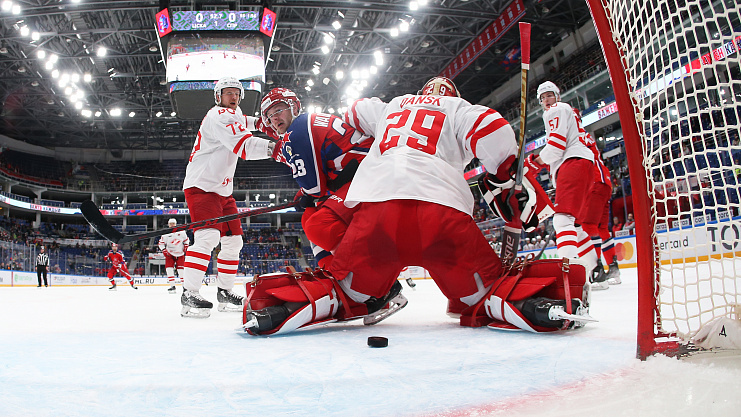 There were several changes in the CSKA camp for the Moscow derby. The goal cage was defended by Radeborn. Grigorenko, Vallmark and Guskov were the starting three attacking players, while in a pair of defenders were Nesterov and Sergeyev. Karnaukhov, Andronov and Kotkov appeared in front of the second line. Plotnikov, Sorkin and Slepyshev ended up in the third five. Poltapov, Svetlakov and Khulapov made up the fourth line. Mingachev became the thirteenth forward.

The Red and Blue seized the initiative during the first minutes. In the second minute, Andronov took a shot on Dansk's goal cage. The goal-keeper kicked the puck into the board. Soon after that, Ibragimov headed the puck toward Spartak, and Slepyshev tried to put the puck in the net, but the referees stopped the play because the forward's stick was held high.

After that, the visiting team stepped up and carried out a counterattack, which resulted in Virtanen's shot hitting the post. The CSKA players were close to open a score in the next attack. Vallmark's shot was deflected by the horizontal bar.

The teams showed quick and sharp attacking hockey in the first minutes of the game. In the middle of the period Grigorenko shot to the near corner, Dansk proved to be reliable. And shortly after that, it was already Reideborn who bailed out the team.

Plotnikov and Karnaukhov had some good chances before the first break, but they couldn't outgame the Red-Whites' goalie. At the end of a starting piece of a play Kvartalnov threatened the home team's goal cage, but the CSKA team goal-keeper cope with the situation.

The tension on the ice was growing with every minute. And in the central zone, Guskov and Lehterä clashed. As a result of the fight, Matvey managed to knock his opponent to the ice. In consequence of the incident, the referees gave the players a 5-minute penalty each.

In the final minute of the first period, the CSKA team needed only five seconds to implement a power play. Vallmark won the throw-in, Slepyshev passed to Grigorenko, who made the pass to Nesterov. The defender made straight from the shoulder shot and Plotnikov sent the puck into the netting. For the forward, this was his 7th goal of the season. Sergey has a total of 15 (7+8) points in 17 games. For the second game in a row, Nikita Nesterov earned points (2 (1+1)).

After the break, Sergey Fedorov's team continued to play as number one. But "Spartak" tried to catch their opponent on the counterattack. The game was played at a rapid pace with few stops, no neutral zone. Time after time, trash-talks erupted between the hockey players, which the referees managed to put out.

In the middle of the game, Reideborn saved his team several times from some tricky Red and Blue shots. The CSKA players also played in defense, blocking the visitors' dangerous outbursts. The final minutes of the second twenty minutes passed in the equal fight, both teams had chances to score.

In the final game piece, the hockey players continued to show spectacular hockey that did not leave the fans indifferent. In debut of the period, the home team launched an offensive assault on "Spartak", and only Dansk's skill kept CSKA from doubling their advantage.

At five and a half minutes before the final siren, the Red and Blue were in minority. But the home team's goalie and the dedicated play of his teammates prevented the opponent from turning the game into overtime. Luck was on our team's side that night. In one of the episodes, the puck hit the bar.

At the end of the match, the visiting coaching staff replaced the goalkeeper and took a timeout. But it didn't help the Red and White. The CSKA team defeated "Spartak" for the second time in a row. Sergey Plotnikov has scored 4 goals in these games. In September's game at Megasport, No. 16 scored his first hat trick in the KHL. Adam Reideborn makes his second "dry win" in the season. Thus, our team wins three out of three derbies this season ("Spartak" (5-3 and 1-0) and "Dynamo" (3-0).

CSKA will play their next game at its arena on October 13 against Khabarovsk's "Amur".