We beat Dynamo in the derby without scoring a point

We beat Dynamo in the derby without scoring a point 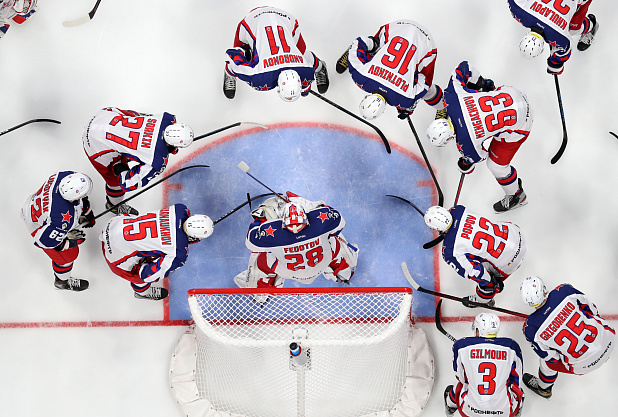 CSKA had two changes in the VTB Arena game of the day. Soshnikov came back. The coaching staff gave him a day off but did not put him on the bench for the game with Kunlun Red Star. Danil Yurtaikin injured on Monday will not be able to help the team in the near future. The 20-year-old Khulapov appeared in a roster. The starting lineup on the attack consisted of Karnaukhov, Andronov, and Slepyshev for whom this game was the 400th in the KHL.

The first minutes of the game were played with maximum intensity on defense for both sides. CSKA overtook the initiative first near the middle of the period. But then the game was played on collision courses without the center ice. As the pace increased, the threat to the goal increased. Soshnikov and Okulov made dangerous shots. Dynamo's goalie made no mistakes, though. The home team tried to play hard in their own zone. Fedotov, however, turned their shots away. In 12 minutes CSKA was short-handed, but thanks to their skillful play on defense they were able to turn away. CSKA team trailed for the final 20 minutes, trying to find a hole in Bocharov's goal.

In the opening stages of the second period, CSKA was down to four again, but this time CSKA has managed to stand. Once again, every centimeter of the rink was contested-even around the center ice board. Our team was able to overtake the initiative in an even game. First, Karnaukhov shot dangerously from a tight angle, and in 31 minutes Popov shot to Okulov from behind the goal. The forward shot and the puckstopper turned the puck away, but Maxim Sorkin successfully put back, opening the scoring for the game. For the 21-year-old forward, the goal was his debut this season.

Before the second break, CSKA team handled another power play short-handed and had a nice scoring chance towards the end of the period. Sorkin came out one-on-one, but Bocharov saved his club.

In the first half of the third period Dynamo created a few dangerous chances, some of the shots were blocked by the defenders, and the rest were taken by CSKA goalie, whose confident play added strength and inspiration to the whole team. The result was a second goal in the 50th minute. Pavel Karnaukhov doubled CSKA team lead, scoring for the second game in a row and his third since returning to the ice. He was assisted by Alexander Popov, who collected his second assistant score that night.

After taking a 2:0 lead, CSKA became motivated and continued their assault on the opponent's goal. Four minutes before the final buzzer, the visitors were short-handed. They managed to stand and even scored. John Gilmore hit the empty goal after Fedotov and Svedberg made a pass to the puckstopper.