We are at disadvantage in the game with Vityaz

We are at disadvantage in the game with Vityaz 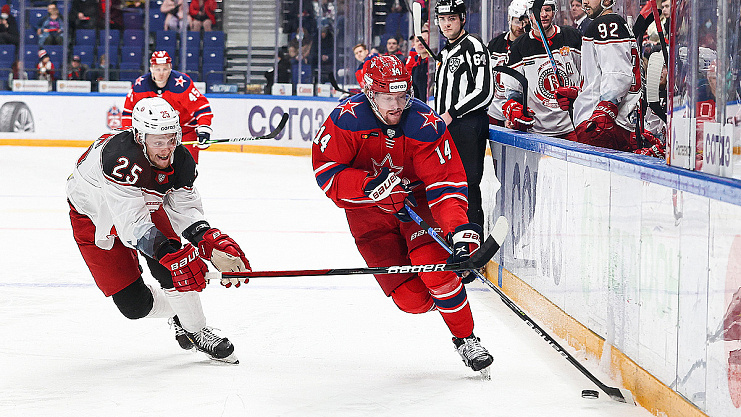 CSKA team finished their New Year six-game homestand with a game against the team from Podolsk. The opponents met two months ago in the league. The game at Vityaz Arena was productive: 10 goals scored in regulation time. The Muscovites won in a penalty shot series (6:5). Mikhail Grigorenko had a hat trick in the game. Sergey Andronov played in CSKA for the 536th time, having set a club record for the number of games played.

Also, on November 5, a 17-years old Vladimir Grudinin made his KHL debut. Our team's defenseman celebrated his 18th birthday in December and appeared on the main team today without his mask after a long break.

At the beginning of the game the hockey players checked the goalies from long and middle distances. In the fifth minute, the home team got the power play. Within two minutes, Saprykin saved his team from an imminent goal several times. Dalbek, Grigorenko, Abramov, and Svetlakov caused most of the trouble in this period for the visitors’ defense and goalie.

With the game at even strength, Fedotov rescued CSKA team. He didn’t allow beating him in close action.

In the middle of the game, Dietz shot powerfully three times from the blue line. But Vityaz's defensemen blocked Darren's shots.

CSKA team held the initiative for the entire first period, but was shorthanded in the 13th minute. Daniel Odette capitalized on the power play, giving the team a 1:0 lead.

Before the break, CSKA team forced the opponent to play shorthanded twice more. The home team made forechecking. But the backstopper’s defensive prowess prevented the visitors from netting the goal and leveling the score. At one point, only by miracle, the puck didn't get over the line. Saprykin awarded the puck just at the goal post.

CSKA continued their strong pressure going into the second frame on the power play. First, Grigorenko shot from the blue line, then Plotnikov shot to the right corner and Svetlakov shot on goal from in close. But Saprykin didn't let to be shot. The backstopper from Podolsk team had the hot hand in this game, saving his club time and time again. But in the 36th minute, even he was powerless when CSKA team took over after only 8 seconds, tying the score, 1:1. Andrei Svetlakov shot the goal from in tight with assist from Slepyshev and Okulov to Vityaz.

In the last periods of the period, CSKA team managed to increase their lead. Grigorenko, who was playing strongly from the blue line, took a shot, but Saprykin turned the puck away.

In the final period of regular time, CSKA continued to dominate, and the visitors’ goalie kept turning dangerous shots away. In one episode, only the post saved Vityaz after a shot by Slepyshev. Nordström, Abramov and Okulov also had good opportunities.

However, in one of the counterattacks, the athletes managed to score. The goal was scored by Fedor Malykhin.

Soon after, the visitors took the lead after a goal by Miro Aaltonen.

At the end of the game, CSKA team put the opponents in their own area. In the final minutes, Wallmark failed when finishing a dangerous scoring chance after assist by Grigorenko. However, in the 58th minute, justice prevailed and a flurry of attacks of home team turned into a third goal. Alexander Popov made an accurate shot. Anton Slepyshev has got his second assist in this game.

As a result, the regulation time, as well as in the first game of the season between these teams, ended with a tie (3:3). In the first seconds of overtime, the visitors took advantage of CSKA team's hit and got the goalie off first. That tactics proved to be successful as a result. In the third minute of overtime, Fedor Malykhin scored the winning goal for Vityaz – 3:4; being in a disadvantage in the game with CSKA in which it confidently outscored the opponent by most parameters, but the opponent was lucky that day.

In the next game on January 9 our team will play in St. Petersburg against SKA.