We are at a minimum disadvantage in Mytishchi

We are at a minimum disadvantage in Mytishchi 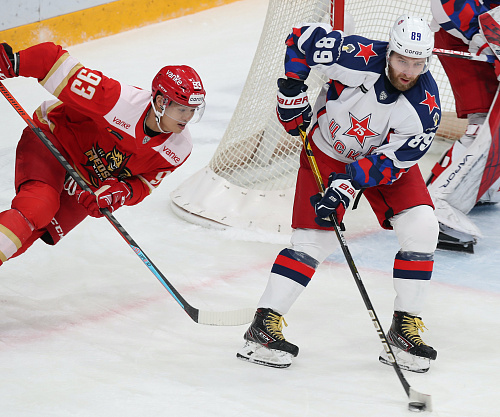 Compared to the derby, there were several changes in the line-up at once. For the first time this season, Andrei Svetlakov appeared, who has missed the start of the championship due to an injury sustained during the off-season. Guskov is back in the lineup after recovering from an injury. Young Poltapov, Kotkov, Kalinichenko and Ibragimov also appeared on the ice.

This match was the 100th in the KHL for Viktor Svedberg, who, in the absence of Klas Dalbek, appered on ice with a vice-captain's patch.

In the opening minutes of the game, the CSKA team's young hockey players were active. Poltapov has shooted from the wrists, but the puck went just above the cage. Then Lugoviak shot, but the puck hit the puckstopper. The hosts responded with a counterattack, but Lockhart was unable to beat Fedotov. But Nikita Nesterov hit the Kunlun goal cage. The rearguard played on finishing off after Kotkov's shot, the pass to which was made by Svetlakov. Thus, No. 87 had only 4 minutes that was enough to distinguish himself in the first match after returning to the ice. And Vladislav earned his first point in the KHL.

After conceding a goal, the "Dragons" tried to move the game into opponent's zone. In one of the episodes, Fedotov helped out our team. But the CSKA team soon carried out a powerful attack. Grigorenko completed the episode, but Smith was reliable. In the second half of the period, Slepyshev hit with a puck the opponent's puckstopper bucket. But Smith didn't need medical aid.

On the 15th minute, "Kunlun" realized the powerplay. Tyler Vaughn scored the puck, tied up the score. At the end of the twenty-minute Svetlakov came out for rendezvous with the puckstopper but Smith saved his club again.

There was a lot of struggle in the second period. The home team looked for any opportunity to run on the counterattack and defended selflessly. In the second half of the match, the red and blue added speed. The treacherous shot was performed by Guskov, Okulov came out on the attacking end finishing the multi-pass combination, but the puckstopper of the Chinese team was in his place. Before the second half, CSKA continued to storm the opponent goal cage, but Kunlun concentrated all its strength on defense and managed to fight off.

In the final third of the game, the CSKA players began to bombard the goal cage of the Dragons without hesitation. But the puck stubbornly did not go into the goal cage, and in some moments Smith showed his skill. The hosts responded to the siege of their gates with counterattacks. Fedotov acted reliably, stopping the shots of the opponent's players.

The last minutes of the match were held in an equal struggle, with dangerous moments at both cages. In the 58th minute, Corey Kane put Kunlun ahead. After the missed puck, the CSKA team ran to play from behind. But this evening the victory went to the opponent. The Beijing team wins with a score of 2:1.

In the next match on October 11, CSKA will host Spartak on its freeze.