Comments of the head coaches of the teams after the first match of the quarterfinals of the Western Conference of the 2021/22 season CSKA - Lokomotiv. 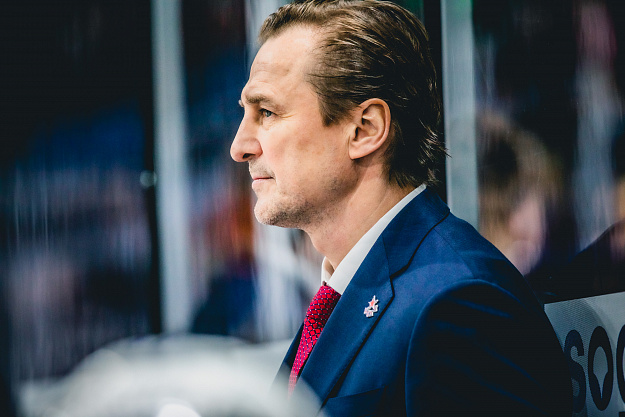 - Quite an intense, stressfull game, I didn't want to lose twice in the match – 1:2 and 2:3. But it happened. The guys did well - they did their best, brought the team back into the game. In overtime, they could not win the face-off to bring the majority to its logical conclusion. But it also happens. I am happy for the team, a good victory, a labor goal, we keep preparing.

– How were the players able to pull out of themselves on the flag of the match and throw the third and fourth goals?

– These are still professional hockey players, so this is not the first time such difficult situations have passed. I would like to keep this desire, determination, assertiveness, somewhere the right aggressiveness in the future.

- A third of the team played at the Olympics. How do I find motivation when the Games ended just a week ago and get ready for the Gagarin Cup?

– I think if there is a certain energy and strength. We understood that the guys needed rest, we made them an active holiday. We tried to understand the loading period of time that remained to us until today's first game.

- CSKA five days ago and today are two big differences. How did you manage to prepare the team in such a short time?

– This is not only my job, but also the coaching staff. The guys themselves were preparing for this day. Those guys who were preparing here had a long break, more than a month without games – it's very difficult. But also those who participated in the Olympic tournament - they were tasked with gaining energy, emotions, spending some time with family and relatives. But the rest of the preparation was in normal mode. The only thing we thought about was the load mode.

– Didn't it seem to you that Fedotov was out of practice and lost his game tone?

– In terms of practice and playing tone, he was very well involved. I think he had a little bit of excitement at the first playoff game.

- Captain Andronov was absent today. When should we expect him to return?

- Yes, we are waiting for Sergey, he has a certain injury to the lower body. Doctors work their magic, do everything possible. He spent several games at the Olympics with this injury. We are monitoring his recovery.

- Individual mistakes knocked us a little out of rhythm. In general, it is impossible to say whether our game was successful or not. We played well in fragments, but individual mistakes slightly slowed down the pace. We are playing against an experienced team, so these should be eliminated. We keep preparing.

– It seemed that after the third missed goal, CSKA suppressed your team. Was Lokomotiv just not ready for such speeds?

– We have been preparing and are ready for such speeds. CSKA began to take risks, it was necessary to show cold blood.

– After the second period, the ratio of shots on net was 28-17 in favor of your team. Was there an instruction to throw from all positions?

– It's just the way the game was going. There were opportunities to throw, and we used them. Quantity does not always reflect quality. But I think that, in principle, three goals scored is enough. But there are a lot of missed ones.

– What did defender Maxim Osipov want to do after the delivered puck? Did you want to start the attack with the first pass?

- Of course, I don't think he wanted to give it to Slepyshev. Hockey is made up of mistakes and we are all human. This happens sometimes. There's nothing to discuss here We need to analyze it, forget it and move on. The series does not consist of one game. Max understands everything perfectly himself. He has done a lot of good things today. Unfortunately, it happened that way.

– What do you say about Barantsev in the situation with the first goal?

- An experienced hockey player played against Den, who felt what he would do. It's not like kindergarten, so we can talk: "You can't do this, but you can do this." Hockey consists of mistakes and the one who knows how to take risks and avoid them wins.

– How much can you say that you know CSKA well? Or has the team changed a lot this year and may surprise you?

- To be honest, we focused on our game. When you play against a strong team, it's important to know what you're doing. Naturally, we dealt with CSKA, but we need to control our game, at least try to do it. Then you can adjust to the opponent.