The head coaches of the teams summed up the results of today's match. 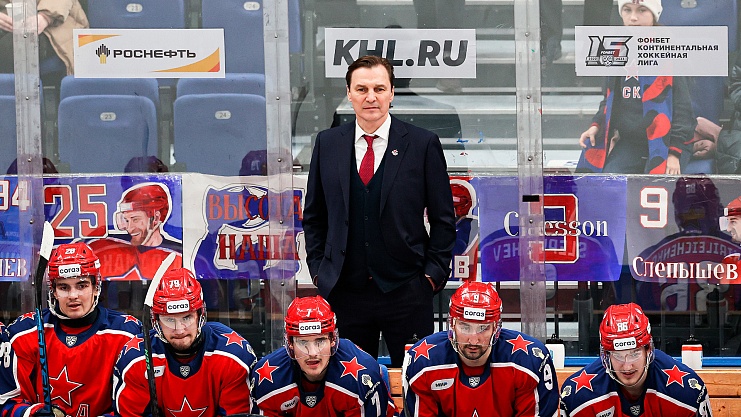 
— Congratulations on our team with a victory, but there were ambiguous moments. I'm glad for the guys that they played all 60 minutes, giving themselves up to the process. But with such a huge advantage, the implementation should be better, and I know for sure that the team understands this. Therefore, we played, won, gained experience, now we will analyze, take the best for ourselves, move on, there is a serious away match ahead, goals will come in handy along the way.


— Speaking on implementation. I don't think we underestimated the opponent, having such an advantage, I think this is due to other reasons that we need to sort out, address, look again, find keywords for the guys so that they understand that they also need to score in training.


— About the absence of players: Klasson and Karnaukhov were given a rest.


— As for medical issues, Slepyshev recovered, as if he had worked out the game well, drawing in the period to go today to play a small amount of time, and he did it qualitatively. I'm glad he scored, because it was his first game after injury. He played great on the moment, with the puck, the line changes were short, so all the rest was a success. This is how the extreme forwards should play, this is how everyone who comes out after an injury should play.


— Nothing was radically changed in the composition of threes and fives, but the guys were warned that the goalkeeper sees, the goalkeeper catches, so they definitely had to put a hindrance in front of the goalkeeper, and the defender had to bring the puck to the goal. This is mandatory, because when we take the defender to the bar position, and he shoots the puck back into the corner, telling the attackers to work with it again while he is standing on the blue line. This is not quite right. This is not a reproach to the guys, this is a statement of fact, they know this, and they know what to do with the puck. But it doesn't always work out.


— It was difficult to radically change something, because the guys came out with good energy, there was a tangible advantage. Sochi played great, they blocked 30 shots, if I'm not mistaken, the team fought selflessly. We played tight in defense, in order to pull such a defense apart, we need to change the wings, which is what we were doing.

— In general, the game was interesting and fast. Of course, we didn't have a very successful second period, the skill of the opponent was visible, there were good changes of attack, the overlap was on our players, indeed, we got a little subsided because there was no opportunity to change in time, there were few whistles. The opponent took advantage of the moment and scored a goal, which led to the victory of CSKA. The third period was played to the end, we fought, looked for an opportunity to score, earned a shootout, unfortunately, did not converted the chance, took off the goalkeeper, and got another goal. But, nevertheless, the game was good, the guys fought, tried, I wish they had scored.


— We have a young team, a lot of players who are in the KHL for the first time, and it takes time to form a team. The most difficult psychological moment is when you try, give yourself, but with no result, it's a big load and pressure. It's hard for young guys to cope with this burden, but we are working, looking for ways, the team does not give up, this is a good moment. It is clear that the team has a future, I would like it to be yesterday or near future, but it is not working yet. One win will give confidence to the players, but so far we have not deserved this luck. But we are working.


— I set up players in different ways, someone with a kind word, someone harder. There should be motivation. We are all professionals, we all play great beautiful hockey, we play for the fans. And no matter how we play, good or bad, we have to show a good game, because our fans deserve it. That's why we fight, we try, this is our motivation.


— Everything is fine with Tretyak. He deserves praise today for the game he played.


— As for Michkov, at the moment I decided that he would score. Plan B was Petkov, who earned that penalty shot. But in the development plans, I gave that opportunity.