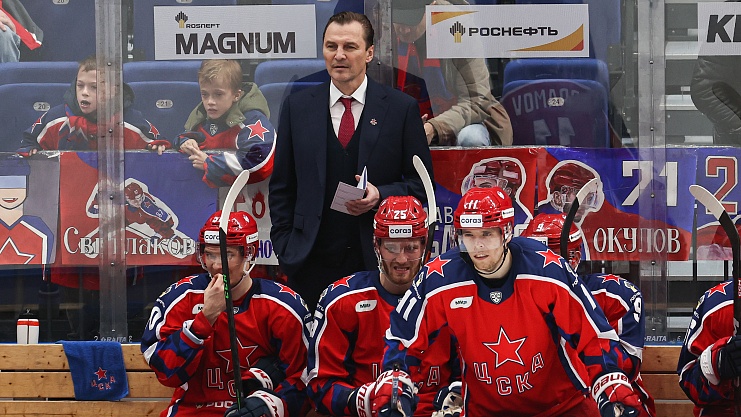 The head coaches of the teams summed up today's game.

— A bit of a messy start for us, we played poorly in defense, conceded a couple of goals. We played confidently the second half of the first period. We showed the kind of hockey that we wanted and that we coached in the second period. There was a task for the third period: to play reliably in the defense zone, but unfortunately, it turned out a little "Brazilian". I'm happy for the team, happy for the guys, they made a big step forward in some aspects, the support of each other and a united fist was felt, so congratulations to all with the victory.

— After the match with "Spartak", you didn't make almost any changes in the links, was there no need for this? Was this match a kind of accident in terms of the result?

— The match against "Spartak" was a good lesson for us, however, it should be noted that the team created a lot of chances, and when we conceded the second goal, we were beaten due to very active actions. So I don't think it was an accident, but we noticed that if we create chances, we have to score, this is our profession. I'm glad for the guys, they made good, correct conclusions, scored a lot of goals today. There is a reaction, so we are preparing further under normal conditions.

— Did you say something before the second period? Maybe you set them up in some way?

— I praised the team after the first period, there was a standard setup for the second, but the game segment turned out a little different, the game was not equal, but a lot on the power play. I also congratulated the guys, because they played with short, accurate and confident shifts, kept the rhythm, which left our opponent in tension, and, of course, all this was crowned with good goals. We got a very good, definite, working experience, and made a good result in the second period.

— Overall, we are a team that is ready to succeed and that is ready to control the game, the first period proves it. We did well, and scored, and coped in the minority. In the second period they created problems for themselves, there were a lot of penalties, they acted undisciplined, so they had to spend a lot of energy, working in the minority. The CSKA realized their moments. In the third period we came back, we fought, tried to improve our game, in general we did some things, but in the end we didn't get the result we wanted. We need to improve our game in different components to beat teams like CSKA. We know this and we will have to work both collectively and individually.

— When will Brandon Kozun be back on the rails?

— It' hard to say when we'll see Brandon, he's got an upper-body injury, he's out of the game for a long time. We hope he will play again this season — this is our goal. Of course, you're right, he was missing. Brandon is an experienced player, a skilled player. He plays with his own character, is always ready to help in such games, on the other hand, other guys have the opportunity. For example, Vadim Moroz showed a good game today against the top team of the league, good work on his part.

— Why did you decide to replace Konstantin Shostak?

— We conceded the 4th goal and after that he did not feel confident, wanted to get back into the game, to cheer the team up.