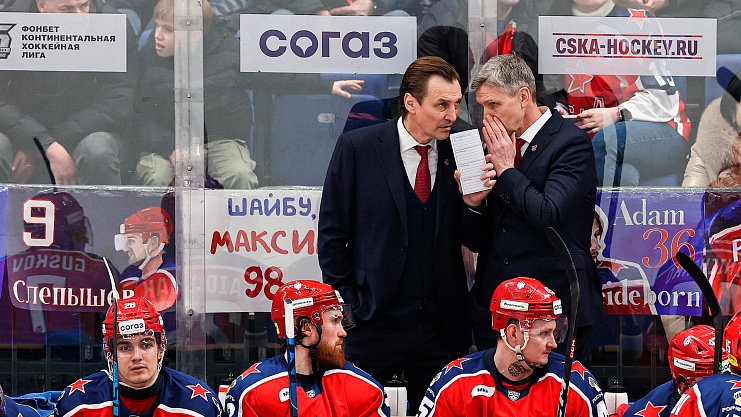 — It's not always easy to win back from zero, and from 1:2, with such an organized team, but the guys found the strength. I would like, of course, to be caught up with us, but it can happen different ways. After all, a large amount of games have been played, hockey players are also human, they may have been tired somehow. We are working on the start of the match, but it doesn't always work out. We will draw certain conclusions, maybe even change some schemes in order to start being in the lead. It takes a lot of energy to catch up with the opponent. Fortunately, we managed today, well done. They showed their character and will. I won't say anything about overtime, everything is clear enough. I had to do the power play option again, as you can see, 3 or 4 half-losses could lead the result in the other direction, so let's analyze and see what can be done there.

— Speaking of leaders within the team. Konstantin Okulov scores points in 4 consecutive matches, having passed a difficult period at the beginning of the season. Can you call Konstantin a person you can rely on in the playoffs?

— It is a deep and far-sighted question. As for the personal statistics of the guys, I know it, but I will not comment on it. Because it's still the efforts of the whole five. Kostya is great, he is moving in the right direction. We will use it more often, more. God bless him.

— A number of key CSKA players were absent today. Mamin, Sorkin, Grigorenko, Reideborn. For what reasons?

— The guys were preparing, but today, unfortunately, they could not come out. There is a circumstance as simple as the flu. They got a little ill.

— Did today's combinations in attack satisfy you?

— In general, they did, the composition of the triples was preserved, the composition of the fives was preserved in some moments of the game. But there was a slightly different component. As a whole, almost everyone was wrong, they invented problems for themselves. Yet the triples didn't always come out in the order in which we started the game. I wanted to save some players, give some guys extra time. But the guys took the rhythm, played very good, with short line changes. The team speed was at the level, but Dynamo is a team that, as soon as it gets the puck in defense, tries to transfer it to the middle zone, and two guys, powerful enough, are already running towards it and pressure is obtained. We warned the guys about switching from attack to defense, and in this case we still managed, maybe not individually, but, in terms of filling the middle zone and even on our blue line, we always have at least 2, or even 3-4 players, so we managed to redirect that pressure into back pressure. And we were able to cut off two Dynamo guys in most cases. I would like to play even more often and more with the puck in front.

— Happy holidays to everyone! I wish you all the best. Full stands. I think it's a great game from two sides. An abundance of chances, speed, matchup. We are very glad that our 17-year-old young Chernyshev scored his first goal, and CSKA played in classic style in overtime. I think the audience liked the game.

— A question about Chernyshov, who became the youngest Dynamo scorer in the KHL. In the first and second periods, you found time to let him out on the ice, he spent 2 line changes, 3 line changes, and in the third period you already had no such opportunity. Why did that happen?

— All in good time. There is a lot of experience for young guys, so there is no need to hurry. They will gain their playing time. First you need to stay with the team, then start taking the ice. It is necessary to introduce them smoothly. Because, you know, he's going to come out now, play, something else, and then he will go down. We need to do everything smoothly.