We beat Lokomotiv and advance to the semifinals of the West

We beat Lokomotiv and advance to the semifinals of the West

The score of the series is 4:0 in favor of our team. 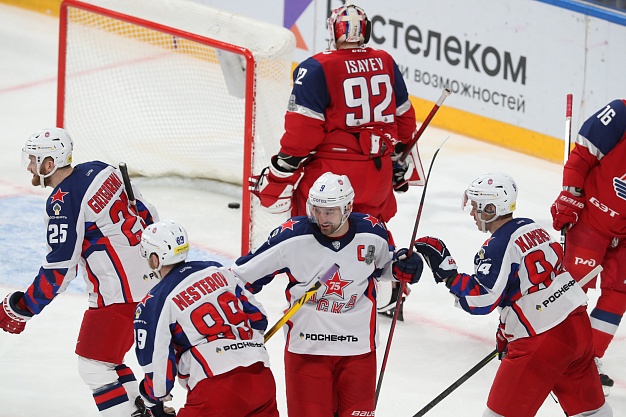 In Yaroslavl's second game in the series, after a marathon third game which proved victorious for Sergey Fedorov's team (3-2 OT), there were no changes to the Army team.

The guests didn't play on their opponent's mistakes and took the lead from the very first minute, earning a power play on the very first play. It took only 13 seconds to execute. Nesterov passed from the blue line to Grigorenko on the right circle, and the forward passed to Kamenev, who opened the scoring by hitting the back nine.

After conceding a goal, Lokomotiv, who had nothing to lose in this game after trailing 0-3, ran to get back into the game. And soon the puck after Averin's throw hit the post. Muscovites responded with no less dangerous attacks. First, Kamenev's shot was blocked by a defender and then Isayev dealt with the threat from Svetlakov, who tried to push the puck into the goal.

In the middle of the period, Yegor Korshkov restored equality - 1:1. But two minutes later, Vladislav Provolonev scored the first puck for CSKA and put the Red and Blue ahead.

The fans didn't see any goals in the second twenty minutes, but both teams' hockey players continued to keep the fans in suspense.

In the final third of the match, CSKA hit the opponent's goal twice more. Mikhail Grigorenko and Pavel Karnaukhov scored goals. As a result, the Army team wins with a score of 4:1 in the match and 4:0 in the series.

In this game, Bogdan Kiselyevich played his 400th match for CSKA. Alexander Popov, who wore our club's jersey for the 300th time, was also marked with a beautiful number.

CSKA will face the winner of the Dynamo-Severstal pairing in the Western Conference semifinals.