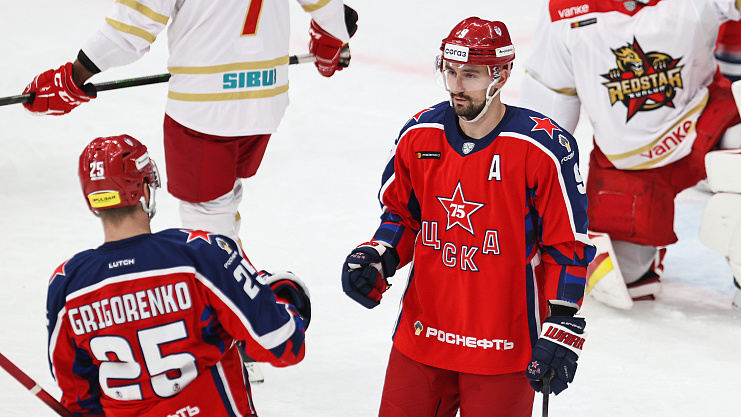 Fedotov took a place in the goal in this match. Popov appeared instead of Soshnikov, who came out in the starting five along with Karnaukhov, Andronov, Sergeev and Dalbek. The second link included Sorkin, for whom this match became the hundredth in jersey CSKA, Grigorenko, Slepyshev, Nesterov and Lugovyak. Plotnikov, Wallmark, Okulov, Gilmore and Svedberg came out in the third five. The fourth link in the application included Kotkov, Mingachev, Yurtaykin, Makarov and Kalinichenko.

Red-blue actively started the game. However, the guests opened the score in the 5th minute. The goal was scored by Spencer Fu. After that, the hosts supplemented forces in offense and became stricter in defense. As a result, after six revolutions of the second hand, Mikhail Grigorenko drove the puck into the opponent’s goal net gaining from the passes of Wallmark and Plotnikov, realizing the majority and making the score 1: 1. In the time remaining before the break, CSKA tried to consolidate its success, continuing to storm the gates of Kunlun. The Beijing team launched counterattacks. But Fedotov acted reliably. At the end of the twenty minutes, the red and blue were able to fight back with four of them.

In the second period, the game was played at a high pace. The army team continued to hold the initiative. In the middle of the match, Konstantin Okulov scored his 100th goal in the KHL. The forward was assisted by Popov and Sorkin. A minute after the scored puck, CSKA earned a free-kick bullet. However, Lazushin saved his team.

In the final period, our team had an overwhelming advantage, which was reflected in two goals. First, in the second match after his return, Pavel Karnaukhov scored a goal from Slepyshev’s pass. And at the last minute of the match, after changing the goalkeeper, Mikhail Grigorenko threw the puck into the empty goal net and scored a double. Sergeev and Plotnikov acted as assistants № 25. Thus, Sergey earned two assistant points for the match. Now he has 14 (6 + 8) points in 14 matches.

In the next game CSKA will face Dynamo Moscow on October 6 at the “VTB Arena”.