Sergejs Naumovs: We have two good goalies ready to fight

CSKA goalie coach Sergejs Naumovs gave his opinion on team netminders performance at the start of the season. 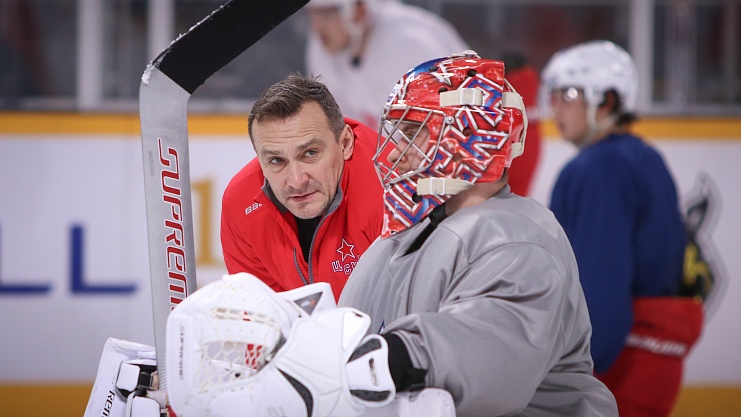 – Lars Johansson got his first shutout in game against Severstal, but had a rough start.

– I don't think guys are in their top condition and had adapted to the game rhythm yet. Lars got three starts but before that he had a big pause – all summer and playoffs. So we needed to divide those games that we've played between two goalies. Lars works so hard that sometimes you need to stop him so he won't overwork himself. What about his shutout – he got really lucky a couple of times (laughs). But it doesn't diminishes his credit in any way. It's a result of hard work. We are happy for him.

– What do you think about condition of Sorokin?

– Ilya played in one game and did it on high quality level. I understand that some fans would be displeased with the goals he allowed. You can't always show your best game at the start of the season. His story is different. Ilya played in every playoff game and after that had joined the national team, so he went on vacation much later. We've moved the start of preseason for him. And, putting into the account all said above, he played more than good. Also, you don't need to forget about new rink sizes. Guys are getting used to new deflection angles and new marking. On smaller rinks bounce off the board is totally different. I'm not looking so critical at those things because it all comes with the time. In all other aspects he played a solid game.

– Who will play in the net in next two games against Torpedo and SKA?

– It's not a secret, Sorokin will play both games. It is logical according to those things I've said before. We split games 50/50 and help guys to get into the rhythm. We have two good goalies ready to fight.