Comments of head coaches on the results of Moscow derby. 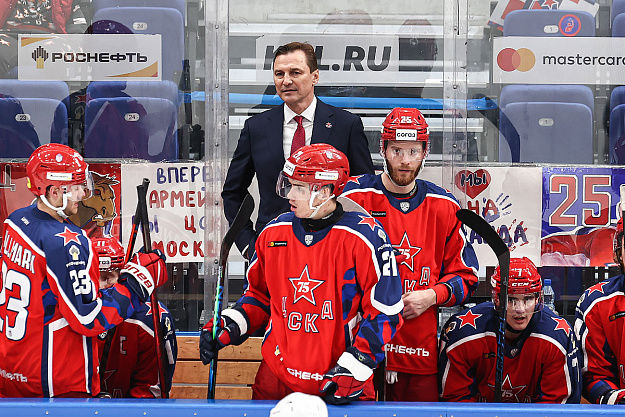 - Tightly-contested, good game. Both teams pressed and created a lot of chances. I think the score coincides with the game - there should have been more goals scored. But that's how the game played out. I think we fulfilled our plan for the game, especially when it comes to playing without the puck. There were mistakes, you can't do without them, but it's a game of errors. This is hockey - a very fast game. The opponent was very good. Happy victory to our guys, the process is underway. We work on, we want to become not only better but also more solid: to finish every moment, to dispose of every puck correctly.

- Can we compare "Spartak" with "Kunlun"? Whether the desire to "get away with" the result against Kunlun, so to speak, gave CSKA additional emotions, but CSKA was much focused tonight.

- These are two different opponents. But both "Kunlun" and "Spartak" are very mobile teams and can play with the puck. If we talk about the previous match, we did not score in the moments we had at the beginning of the game. Then the game got away from us, and not because we didn't play well without the puck - we didn't exactly play well with the puck and earned some unnecessary penalties that interrupted our team rhythm. Today is the derby, today is another opponent. You can't compare these teams and underestimate any of the opponents. We prepare for every game, as I have said many times and will say - we pay attention to those moments that we can control, that is, to our game, ourselves.

- What is the reason for the absence of Konstantin Okulov?

- Konstantin is working on an individual program; he's working on strengthening his game, especially his puck game. It's a coaching decision.

- Is Nikita Soshnikov out for a long period of time?

- What to do with Nikita will probably be understood within the next two days. As far as I know, recovery is underway. I think we'll get some good news any day now.

- CSKA has a lot of losses in the lineup, is it hard to cope with that?

- I think every team will go through such a period of lineup loss, it's a long season. Of course, we would not want to play without many key players at the very beginning of the season. It's tough, but the guys are mobilized, the guys are rallying. We try our coaching staff to give them optimal conditions in the game and in the training process to make them ready.

- Could you tell us a little more about Konstantin Okulov?

- As I’ve already said, there is a process underway. Konstantin works on an individual program. Both with and without the puck, he can and, I think in the near future, will play right, and play for the team. So I don't see a big problem. Certain conclusions have been drawn from the past few games. And he needs to tighten that direction. With his skill, he can do it in a very short period of time. We have a good contact. We're all human. This is a professional topic. Everyone knows what we work for and how we work. As I said in the beginning - it's a process for the whole team, for every player. I think that in the near future we will overcome all these moments and we will be a very strong team and a very strong team on the ice.

- We can say that Matvey Guskov and Jori Lehterä are from different weight categories. But Matvey endured this test. How do you rate this fight?

- You're right. Different weight categories, different experiences. But the twenty-year-old boy withstood the pressure with dignity. We get stronger after moments like this.

- I enjoyed the game today - good game, lively game. Tonight, of course, was not our night: the puck was bouncing, the bars, but it wouldn't go in the goal cage. And a little bit of discipline got in the way, again unnecessary penalties, which the opponent took advantage of and brought the game to victory. Good for the guys, they tried hard and their desire was great. The most important thing right now is to carry that desire into the next game. Let's get ready.

- Almost a month ago, the teams already met. Are you pleased with Spartak's progress during this time?

- It's hard to say anything. We go from match to match: There are games that the team does well and there are some losing games. We are trying to have some kind of stability, we want the team to come out and show good hockey in every game. The guys have that desire, they are trying. Tonight's probably not our night. The puck wouldn't go in the goal cage - it happens. The most important thing is to keep going, get ready for the next match and the result will come.

- Today Ilya Kovalchuk gave a big interview, he's in Moscow now. Would you like the forward to strengthen Spartak?

- I think any club would like to have a player like him, both off the ice and on the ice. I think there's a huge desire in everyone. If that happens, that would be great. That's the kind of leader everyone needs.