He faced the first attack. Boris Mikhailov is 77!

He faced the first attack. Boris Mikhailov is 77!

The uncrushable captain of CSKA and the USSR national team, the leading sharpshooter in the history of the Soviet championships, as well as the national team at the world championships and the Olympics, the first winning coach of the Russian national team - Boris Petrovich Mikhailov celebrates his 77th birthday on October 6, 2021. 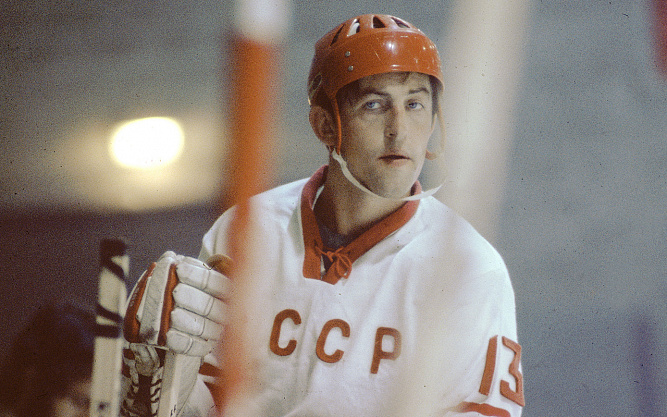 Mikhailov came to CSKA rather late - at 23 years old. On the recommendation of his sidekick friend from the old days, Yevgeni Mishakov. "You can't do many things, but you have a character. If you stand the training, you'll play," the coach Anatoli Tarasov was brief when he met the newcomer.

Mikhailov not only stood and played, but became the banner of CSKA. He inherited the seventh number of the "academician" Konstantin Loktev. And took No. 13 in the national team, which many avoided and continue avoiding like the plague.

It was Konstantin Borisovich Loktev who appointed Mikhailov to the post of CSKA captain - from the start of the 1974/75 season, right after Tarasov left. And in the national team Boris Petrovich tried on the letter "K" in the 1973 World Championship in Moscow, where the trio of Mikhailov - Vladimir Petrov - Valeri Kharlamov scored 43 pucks out of a hundred. The last one, the hundredth, was thrown to the Swedes by the captain, responding to the call of the coach Boris Pavlovich Kulagin: "The one who scores the anniversary goal will get a cognac".

At that tournament, full CSKA team entered the All-Team, and Mikhailov was named the best forward by the directorate. At the 1979 World Cup (again in Moscow) the history repeated itself: the trio of Petrov and Mikhailov were the winners. And the national team captain was the first one to win the "Golden Stick" as the best European player of the season.

The year before, after the 1978 World Cup gold in Prague, Mikhailov and Tretiak were awarded the Order of Lenin. Before them, only Vsevolod Bobrov was awarded such an honor.

Mikhailov and Petrov joined CSKA before Kharlamov did. They managed to play in a tandem with Veniamin Alexandrov himself. "Uncle Venya grumbled at us youngsters," Mikhailov recalled. - It was hard for him to keep up with us." Back from his exile-mission to Chebarkul, Kharlamov staked the left wing in Petrov's trio. The best in the Soviet hockey. It, and only it, took the opponents' first shot - and that was worth a lot.

Mikhailov was quick, assertive, unyielding in his fight. He demonstrated his great skill with his long stick on the doorstep, terrorizing the goalies. Unnoticed by the judges he knocked their "guitars" down. When the puck dived into the goalie's "house," many thought it was a "butterfly. After two twin goals in the fourth game of the Super Series-72 in Vancouver - in both cases Mikhailov had corrected a shot by Vladimir Lutchenko - Boris Petrovich was named the best Canadian forward of the USSR national team.

For him there were no uncomfortable puckstoppers, he could tame them all. In the opening game of that very Super Series-72 (7:3) Mikhailov and Petrov tied the score (2:2) in a dashing short-handed counterattack, and then Boris Petrovich scored the fifth goal which ended all questions about the winner.

At their first Olympics in Sapporo in 1972, Yuri Blinov was paired with Mikhailov and Petrov. In his opening match with the Finns, Boris Petrovich got a knee injury – lateral ligament bursting and meniscus injury. Now he would have a month and a half to recover. But then...

He missed the games against the Swedes and Americans, but in the game against the Poles he came out after injections, relying on his stick, and even managed to score, although he left the ice early. But in the last meeting with the Czechoslovaks, Mikhailov disappointed the puckstopper Vladimir Dzurilla in the first period with a weak shot almost from the blue line. Our team won 5:2 and hung the puckstopper out to dry.

"I couldn't get the puck from the blue line to the goal," Mikhailov likes to repeat. But at the same time, he scored more than anyone else. 428 goals in the national championships and 109 for the national team say it all. It was his puck to the NHL team’s goal, which was defended by the famous Jerry Chivers, that became the game winning in the Challenge Cup-1979. They tried to quickly forget the 6:0 tennis zero score at Madison Square Garden in the United States, but made the right conclusions.

Mikhailov wore the letter "K" on his playing jersey for eight years and ended his career in amazing silence. He was forced to hang his skates up and cuff his stick.

It's not often that great players become great coaches. Boris Petrovich did. At the 1993 World Championship in Munich the national team under his leadership crushed Mike Keenan's Maple Leafs 7:4 in the semi-finals, losing 1:3. After all, the Canadians’ goal was defended by Bill Ranford, the MVP of the 1991 Canada Cup. And in the final, the Swedes were beaten 3:1. Only 15 years later the Munich's success was repeated. The shine of medals (now silver) was seen by the Russian national team at the World Championships only in Sweden-2002. And again, under the leadership of Boris Petrovich.

Mikhailov dreamed of leading the national team at the Olympics, but was unlucky. In Turin 2006, he helped Vladimir Krikunov. In the quarterfinals, our team knocked out Canada (2:0), which was completed by Wayne Gretzky, and the Russian captain Alexei Kovalev confessed that it was his assistant Mikhailov, not the head coach, who was in charge of the game. Krikunov once said that Boris Petrovich is the most decent specialist in the Russian hockey.

Mikhailov is currently the honorary president of CSKA and a member of our Club's Supervisory Board. The MHL team from the Tula region is named after him. In the Russian Hockey Federation Boris Petrovich is a member of the Board of Directors and the Council of Experts.

It only remains to herald him into the Hockey Hall of Fame in Toronto. It's a matter of honor for the electors. Mikhailov has earned.