Ivan Fedotov: I said to my 11-year-old goalkeeper brother: “Hello, bandit! What are you doing, are you all still playing mischievous?”

Zvezda
Main page / News / General / Ivan Fedotov: I said to my 11-year-old goalkeeper brother: “Hello, bandit! What are you doing, are you all still playing mischievous?”
General
362

Ivan Fedotov: I said to my 11-year-old goalkeeper brother: “Hello, bandit! What are you doing, are you all still playing mischievous?”

The CSKA goalkeeper talked about spray printing on his mask, talking with his 11-year-old goalkeeper brother, love of reading and walking around St. Petersburg. 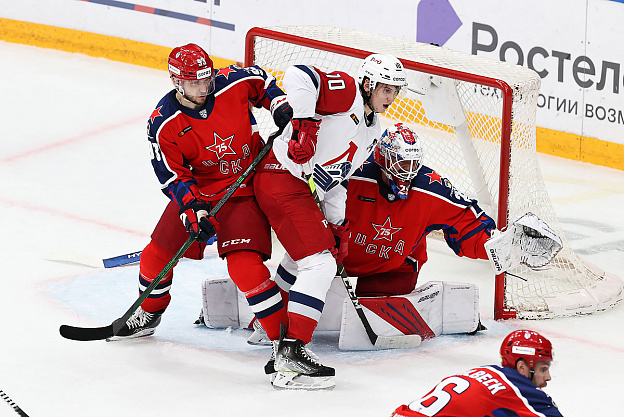 - Ivan, the match with “Kunlun” ahead. What can you say about this club?

- While watching the matches of this team, you see they score five or six goals. It’s an intriguing club. Well done, they often play with an experimental line-up. This match will be a test of the literacy of our game for us.

- You became the best goalkeeper of the 2nd week of the KHL. You have done it for the third time in your career. Did you expect such recognition?

- I roughly calculated that I played three matches, probably I have little chances. They will choose at all accounts, I did not particularly follow this. I don’t think we need to focus on this. The most important thing is that we won these fights.

Of course it’s nice. It whips up a little. But this is not so important. It is better to win the Gagarin Cup, but not to become the best goalkeeper, so that all the fans and players would be happy, including myself. Winning a trophy is more important than making any individual achievements. I think any athlete will agree with this.

- You've been waiting for your helmet for a long time. Tell me, what is it depicted on it?

- I wanted it to be austere. There was no desire to invent something. It so happened that I had been waiting for it for a long time. But thanks to Sasha (Sasha Artmask airbrushes the goalkeeper masks), he painted and did it as soon as he got it. First he sent me a sketch, after that we discussed some details. I wanted to see the architecture of Moscow and my hometown - St. Petersburg. There is a number 75 on the mask - the age of CSKA and Russian hockey. The emblem of the club is also depicted and my number 28 is written. Everything is drawn strictly in red and blue colors. It looks harmonious, so I'm satisfied.

- Are you more comfortable wearing a mask like this than a regular one?

- Deadass. This is a helmet that is comfortable and fit for me. This is individualization. It is much nicer than some standard white. It is important that the professional solidity of the goalkeeper is combined with his appearance.

- I agree. Why are you performing under number 28?

- I like him. When I was still moving to “Traktor” I decided that something had to be changed. Being a child, I once had number 28, and it sympathized enough with me – it evoked pleasant associations. And I thought, let us try - a new place, a new club, why not? I feel comfortable with it. Before that, I had numbers 30 and 33. Yes, these are the goalkeeper numbers that prevail in hockey. But I realized that the 28th is the number that I should have. Now I do not regret anything and I believe that this is the right choice.

- Our team has two giants - you and Victor. Did you manage to find out which of you is taller?

- When I come up to him, I make a jump to be taller (smiles). I don't know which of us is taller. He is bigger than me, the reason is he is a rearguard. I'm used to being always taller than everyone else, and when I am of about the same height with someone, it always seems to me that I am shorter.

- One novice goalkeeper once at a training session at CSKA ARENA came up to you. Was that your brother?

- Yes. This is my younger brother Yegor. I have two of them. They were born in 2010. One is in CSKA, the second is Fedor, he is in the team of the Moscow region. Both are goalkeepers and immersed themselves in this business.

- Did you give him a hint or just chat?

- I say to him: “Hello, bandit! What is it, all the mischief?” I watched his workout and noticed some details that I didn't like. He gave instructions, suggested some directions for him. He took it all in, and then I don't know what happens next.

- Absolutely. He has no choice.

- Do you feel pride in his elder brother?

- I think, certainly, he is pleased, just as I was in my time ... At his age, when I went to CSKA matches, studying in the army sports school, I looked at everyone with burning eyes - someday I would take their place. I hope my brother is proud and will strive to move forward. He has a living example of what to go for and maybe even surpass.

- How do you spend your free time between matches and training?

- When I have time, I can play with the set-top box, "fool around" - lie down, take a walk, read something. Sometimes I use an e-book.

- What are you reading?

- It depends. Now I am reading a large volume by Schopenhauer. He has quite philosophical everyday observations. I notice some positions that he disputes. I agree with some, with some I do not. I also read about how to correctly perceive information and communicate with people.

- Does it help you in playing hockey?

- I can't say that I use it in practice. It’s just interesting for my own development. I’m interested in what people think and how they believe it can be learned from it. One studies, reads, tries to learn something new when time permits. I cannot say that I read such literature on an ongoing basis – I do it when there is a desire and strength.

- You were born in Finnish Lappeenranta, but soon you moved to St. Petersburg and consider this city to be your hometown. What places in the Northern capital are must-watch?

- I like the whole city. I cannot say that I have any one symbolic place. I spent my school years from the seventh to the ninth grade on Vasilievsky Island. When you're in adolescence, all the fun happens - how we communicated with friends, studied, skipped lessons. We had pleasant memories.

- A man goes to St. Petersburg for the first time. What place should he visit?

- City center - Palace Square, embankment - along which you can pass in summer and admire the bridges, the Admiralty, the Peter and Paul Fortress. You can't get lost there and you can see a lot.

No specific place, but in summer I like to walk in Gorky Park.

Favorite way to reflect a throw

It has not been read yet, maybe in the near future there appears a favorite