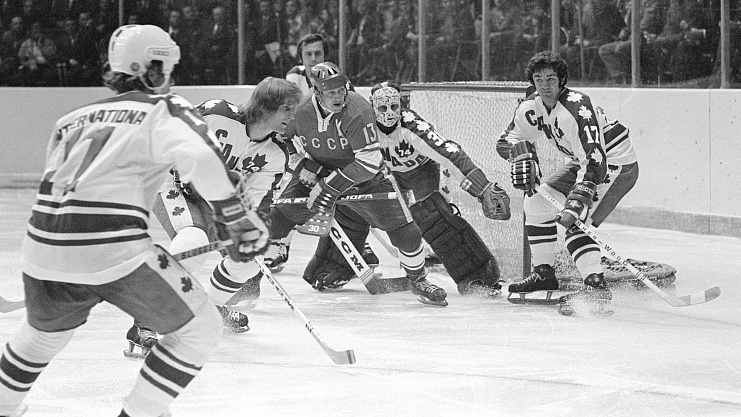 People in North America try not to remember that series. Because the Canadian team, made up of players from the World Hockey Association, lost. We shouldn't forget the first common victory over the Canadian pros, especially since their team was rich in big names, well prepared, and self-confident.

Gordie Howe, 46, was "Mr. Hockey" who ended his career, but two years later signed the contract with the WHA Club Houston Aeros. He was heralded into the Toronto Hall of Fame and stepped onto the ice with his sons, 25-year-old forward Mark and 20-year-old defenseman Marty. Bobby Hull, 36, was quoted as the best forward in the NHL in 1972, and he signed a stratospheric contract with the Winnipeg Jets, becoming the first ever millionaire hockey player. Jerry Chivers, 34-years old puckstopper, left Boston, with whom he had won the Stanley Cup twice. His mask, on which he drew scars when hitting the puck, made history.

Red haired defenseman Pat Stapleton was familiar to fans from the '72 Super Series, as were the forwards Frank Mahovlich and the USSR's evil demon Paul Henderson. This constellation was coached by Bill Harris, 39, who had studied the Soviet hockey, respected our school, and was familiar with the works of Anatoly Tarasov. Harris led the Swedish team at the 1972 World Cup in Prague and the 1972 Olympics in Sapporo. In Japan he almost stopped the USSR national team, playing with it in a 3:3 draw ("Tre Kronor" during the match were losing 0:2 and 1:3). He was assisted by playing coaches Stapleton and Hull.

Boris Kulagin, the instructor of Krylia Sovetov leaded the USSR national team after the 1974 World Cup. Before leaving CSKA, he was a friend and teammate of Anatoly Tarasov. Konstantin Loktev, the new head coach of the Moscow CSKA team, joined the staff, as well as Vladimir Yurzinov, who returned from his business trip to Finland.

Ten members of CSKA, nine of Krylia Sovetov, four of Spartak, two of Dynamo and one of Torpedo Gorky player took part in the '74 Super Series.

The opponents were to play eight games - four in Canada and the Soviet Union. Overseas, they played in Quebec, Toronto, Winnipeg, and Vancouver. Only in Moscow, in the renovated Luzhniki Sports Palace for the 1973 World Cup.

Not only Hull's double, but mainly Kharlamov's magic goal figured the opening game of the series, which ended with a 3:3 tie. The CSKA forward got halfway across the rink at a high speed, deceptively shoveled both Stapleton and Jean-Claude Tremblay to one side and slammed the puck under the crossbar over Chivers, who was sprawled on the ice. This goal tops various international charts until present. All three goals for the USSR national team were scored by CSKA team: Lutchenko, Kharlamov, Petrov.

Some of us underestimated our opponent, Petrov even said that we shouldn't score too much, but we could barely defend the draw," recalled Lutchenko, the author of the Soviet team's first goal. - Howe was impressive, he was 46, but he was a real athlete, he pitchforked Gena Tsygankov and elevated him over the ice, he had such power. And Gordie's elbows are very sharp, I felt it myself.

The second game in Toronto was the WHA parade. If not for Tretiak's saves (he turned away a shootout), the home team could have scored twice as many goals. After two periods, the Canadians led 3:1. At the beginning of the third period, Petrov sent the puck under the crossbar. The puck bounced off the tightly stretched goal and shot out to the field. A red light lighted up behind the goal, but the Canadian referee Tom Brown didn't count the goal. The next day, he admitted his mistake and apologized. But the scoreboard showed 4:1.

In game three in Winnipeg, our team gained a convincing revenge, 8:5, with eight pucks in Don McLeod, Chivers' fill-in, goal. The Canadians coaches never changed their starting goalie. National captain Mikhailov and Petrov each had a goal.

"I could barely finish the game in Toronto, I had almost no energy left," Tretiak recalled. - When the score was 7:2 in the third period, I came to the bench when the goal was changed - maybe they'll replace me, give me a break. They gave me liquid ammonia and I kept playing and missed three pucks in a row. I was reminded of myself by Henderson, our evil demon in the '72 Super Series. He scored two pucks in a row. But the Canadians couldn't do more in Winnipeg.

While Hull failed to produce in his small motherland, he went all out in Vancouver. In the first period of the fourth game, the Canadians' offensive leader made a hatter.

"Hull's shot is just crazy, he can shoot from both the hands and the swing, you can't see the puck," Tretiak recalled. - I started to roll out in front of him to shorten the angle of attack.

After the first period the home team led 5:2, at the end of the third period the score was 5:4.

- We need a fifth goal, who can? - Kulagin called out.

CSKA player Alexander Gusev did it. His shot could compete with that of Hull, whose puck was flying at 160 km/h. The game was tied 5:5, and the score was tied 17:17 when the scores are even in the Canadian part of the series.

Before the games in Moscow, our coaches remembered Vladimir Vikulov, who was considered by many to be the most technically skilled player of the Soviet era. In the game five, it was Maltsev's heads-up pass that opened the scoring. And the goal-ahead goal was scored by Gusev.

The sixth match ended with a convincing victory of the USSR national team 5:2. Mikhailov opened the scoring, while Kharlamov closed the scoring. In the end, the Canadians, like in the game 6 of the Super Series-72, began a hunt for "Legend #17. Before the final buzzer, their defenseman Rick Lay set upon Valery with blows. The officials did not have time to intervene, and the Canadians did not allow our players to go to the conflict zone. No, this was a real beating. Kharlamov left the ice with blood on his face. Soviet hockey players refused to shake hands with their opponents.

At the press conference, Harris, who promised correct hockey, could not intelligibly answer a single question about the fight. He said that he did not see when it started. The next day the Canadians apologized and the conflict was over.

In the seventh game, our hockey players took an early series win. There was a tie, with the third and fourth goals scored by CSKA players Gusev and Mikhailov. Hull scored the fifth goal, which gave the visitors a chance to overall draw. The distress signal flashed behind Tretiak's goal, but the referee didn't count the goal, saying that time had expired. That referee turned out to be... Brown, who didn't see the puck for Toronto by Petrov.

Hull scored his seventh goal of the series, but to the second goalie Aleksandr Sidelnikov. He never managed to hit Tretiak's goal in Moscow. To the dismay of the TV crews who filmed the documentary movie "Hull vs. Tretiak". They even caught the episode when the Canadian leader dropped his glove in front of our goal, challenging the goalie.

The result of the '74 Super Series: four wins for the USSR national team, one win for the Canadians, and three games ended in a tie. CSKA team played the title roles in this hockey feast.