CSKA lost points for the first time in the season

CSKA lost points for the first time in the season 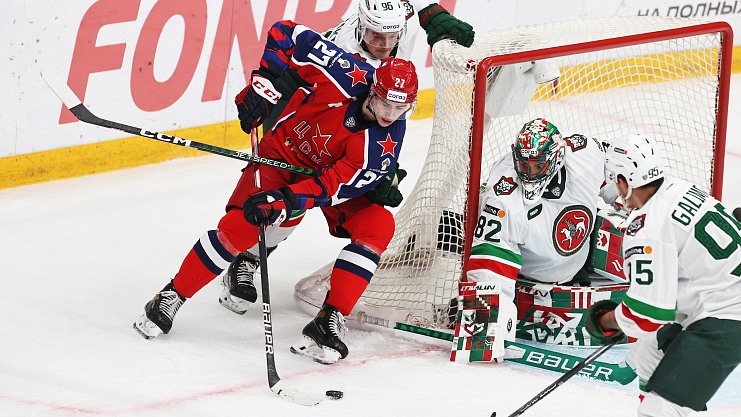 The third and last match in the home series was played by CSKA against Ak Bars Kazan. This statement is always loud, and this season Kazan residents attract additional attention to themselves. The famous Oleg Znarok came to the post of head coach, the team was strengthened by the league's top scorer Vadim Shipachev, who immediately became the captain of Ak Bars, defender Vyacheslav Voynov and ex-CSKA player Alexander Radulov.

For the first time in the season, goalkeeper Alexander Sharychenkov joined the starting line–up of CSKA, and the first three consisted entirely of pupils of the club school - Pavel Karnaukhov, Andrey Svetlakov and Maxim Sorkin. Otherwise, there were no changes. Konstantin Okulov, Maxim Mamin and Bogdan Kiselyevich continue to recover from injuries.

The most dangerous moments in the first minutes of the meeting arose at the gates of CSKA, and in these episodes Sharychenkov showed himself brilliantly. The CSKA team did not attack too sharply at first, and even in the majority it was not possible to strain the goalkeeper of the guests Bilyalov too much. CSKA created the first one hundred percent chance unexpectedly: a forward pass was passed to Slepyshev, who turned on the jet speed and ran away from Voynov, but at the last moment the defender prevented Anton from throwing at the goal. But the goal was already close. Soon the guests were dissmissed again, and the account was opened. Vitaly Abramov was given a lot of time to aim properly, and he accurately fired under the crossbar. But before the break, Ak Bars equalized. After Safonov's throw from almost zero angle, the puck slipped into the goal in an offensive way for us.

And almost immediately after the break, the guests also came forward. The scenario of the match with Neftekhimik was repeated. In the attack of Oleg Znark's teams during the match clearly played out, and hot situations often arose at our gates. In the second period, none of them led to a third goal, but the visitors were persistent. The failure in defense led to a 2-in-1, which Radulov confidently completed – 1:3. CSKA still looked unconvincing in attack and this time failed to organize a chase. And at the last minute missed another one, first into the empty goals, and then again with 5 on 5, bringing the score to a more unpleasant one. Today wasn't our day. The CSKA team suffered their first defeat of the season.