91 years has passed since Viktor Vasilyevich was born

91 years has passed since Viktor Vasilyevich was born

Viktor Tikhonov would have turned 91 today. There is no other coach in the world with such a list of outstanding wins. Under his leadership, CSKA won 12 national championships; Viktor Vasilyevich trained world-class stars, saved CSKA during the time of troubles and helped the club return to the domestic hockey elite. 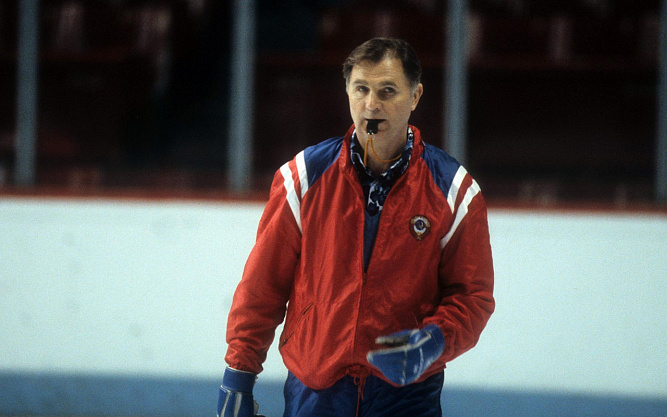 In 1977, Tikhonov stepped behind the bench of the national team and became the CSKA head coach. Since two consecutive defeats of the USSR national team at the 1976 and 1977 World Championships, it was decided to make the CSKA club the base for the national team. Sergey Kapustin from Krylia Sovetov and Helmut Balderis from Dinamo Riga joined the team.

The CSKA old-timers were watchful of the new coach. At first, Tikhonov had a rough time. The Czechoslovak national team hammered the players of his team with a 3-8 score in the 1977 Izvestia Cup tournament, and it did not give much ground for optimism before the World Cup in Prague. However, in the capital of Czechoslovakia, the national team went the whole nine yard to regain the championship title. Moreover, after beating the NHL team at the 1979 Challenge Cup and the 1979 World Cup in Moscow, the coach's authority boosted.

Viktor Vasilyevich was always thinking about the future, prepared the trainees, trusted the youth and let them be on the team. This was one of the CSKA traditions.

At the Canada Cup in 1981 the coach presented a new forward group consisting of Makarov - Larionov - Krutov, Fetisov - Kasatonov, which was rightfully considered the best in world hockey in the 1980s. In general, Tikhonov was known as a great master of creating super forward groups. At the '87 Rendez-vous in Quebec, the Khomutov-Bykov-Kamensky forward group scored a big win in two games against the NHL team (3-4, 5-3), the latter being named the MVP of the series. A year and a half later, the world marveled at the forward group of Mogilny - Fedorov - Bure, which was to become the successor to the KLM line (Krutov - Larionov - Makarov).

Viktor Vasilievich was distinguished by his fantastic capacity for work; he personally studied his opponents and came up with innovations. The four-forward group game is his know-how. Tikhonov was often seen at the most boring matches taking a notebook in his hands. He was noticing and noting down many things.

When the situation in the country changed, in the era of openness (glasnost), Tikhonov did not respond to public accusations of old-style leadership methods. "I could have, but I decided not to waste time," Viktor Vasilyevich explained it this way.

At the same time, he was not grudge-holding, hockey came first for him. He could forgive, but sometimes he made tough decisions. For example, he axed the goalkeeper Belosheikin for systematic regime violations, the forward Vyazmikin, whom he considered the most talented player among all those with whom he had a chance to work.

When all the leaders left the CSKA club, Tikhonov did not leave the club, he continued working. In the mid-1990s the young CSKA brought in a full house at the Leningrad Prospect arena, while the championship leader Dinamo had less than a thousand spectators.

Tikhonov prepared for the national team a bunch of forwards Romanov-Belov, who played at the 1995 World Cup. Soon Samsonov became a new star, who became the first in the new history of Russia (Makarov is not counted), who managed to win the "Calder Trophy" for the best NHL rookie.

Tikhonov kept CSKA, in 2003 at the age of 73 he was invited to lead the national team. Everyone firmly believed that the famous coach would be able to perform a miracle. Unfortunately, it didn't work out. Nevertheless, it was with him that Alexander Ovechkin made his national team debut.

In the 1990s, Tikhonov was not about the results, even working in the major leagues, he was bringing talents to light. The goalkeeper Eremeyev, fullbacks Denisov and Kulyash, and forward Mozyakin, currently the sharpshooter of the sharpshooter and all national championships, made their debut in Viktor Vasilievich's creative laboratory.

And in 2012, thanks to Tikhonov, the cooperation between CSKA and Rosneft began, thanks to which the club returned to the leaders not only of Russian hockey, but also became the best club in Europe. It is a pity Viktor Vasilyevich didn't live to see the day when the Moscow CSKA players won the Gagarin Cup.

Viktor Vasilyevich Tikhonov was born in Moscow on June 4, 1930. He started working in war period at the age of 12 as a mechanic in the bus depot, and he joined the CDKA (now the CSKA) at the age of 15 after the war, played football and ball hockey, and started playing hockey later.

He began his own coaching career in 1966 in the club "Dinamo" (Riga), before which he worked for three years as an assistant coach in Moscow "Dinamo". In Riga, he was able to achieve significant success, leading the team to fourth place in the USSR championship, repeating the team's greatest achievement of 24 years ago.

In 1994, for the first time in the history of Russian hockey, the Russian national team, led by Tikhonov, was left without Olympic awards. After that, Tikhonov resigned as head coach of the national team, but was still CSKA coach. In the summer of 2003, after the national team had several coaches who had unsuccessfully tried to lead it out of its crisis, the 73-year-old Viktor Tikhonov once again received an offer to lead the Russian national team. However, after his unsuccessful performance at the 2004 World Championships, Viktor Tikhonov resigned his coaching work.

In 1998 he was inducted into the IIHF Hall of Fame.

Bowing to Tikhonov's merits in national hockey and on his 70th birthday, the Russian Cosmonautics Federation awarded the famous coach with a medal named after the first cosmonaut in history, Yuri Gagarin.

Until 2014, he was honorary president of the CSKA hockey team.

He passed away following a long illness on November 24, 2014.

Order of the October Revolution (1988)

Order of Friendship of Peoples (1981)

Order of Merit for the Fatherland, 3rd class (December 20, 1996) - for services to the state and outstanding contribution to the development of domestic ice hockey

Order of Honor (June 3, 2000) - for great contributions to the development of Russian hockey

He was one of the first in the country to be awarded the First class Medal of Military Valor established by the Russian Defense Minister.

chevalier of the Olympic Order

Member of the IIHF Hall of Fame.

Victor Tikhonov's name is inscribed in the Museum of Olympic Glory (in Lausanne).