43 years ago, July 1, 1979, was the day when the legendary Vsevolod Mikhailovich Bobrov passed away. 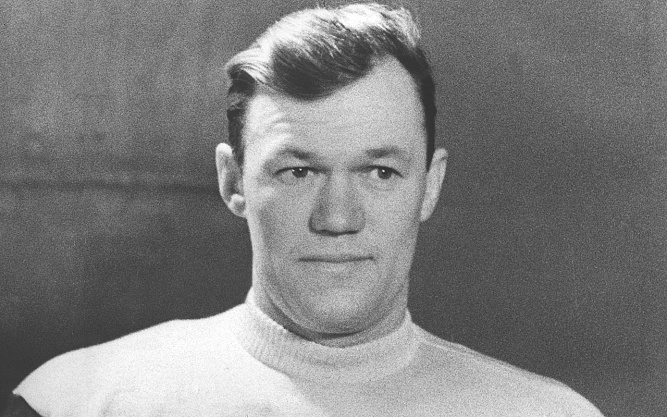 Vsevolod Bobrov was born in 1922 in Morshansk (Tambov region, Russia). Little Seva's (Seva is nickname for Vsevolod) love for sports was settled by his father Mikhail Andreevich, who was also a good soccer and hockey player. In winters, there was a small rink in their yard, and five-year-old Vsevolod and his brother Volodya played against their father, who after a while had to take his daughter as his assistant.

It was ball hockey that became the first sport in which Bobrov proved himself at a serious level. After graduating from school, Vsevolod went to work as a toolmaker at the Progress plant and started playing for the plant's Russian hockey team. Soon he and his brother were invited to Leningrad "Dynamo", in the composition of which they became twice USSR champions before the war. After that, Bobrov never returned to ball hockey.

During the war, he was evacuated to the city of Omsk together with the plant where he worked; there he seriously interested in soccer and in 1945 he made his debut as a member of the CDKA soccer team. In autumn the same year he was invited as one of the best players in the country to Moscow "Dynamo", which went on tour in Great Britain. It was in London, Bobrov first became familiarized with the Canadian hockey version heretofore unknown in Russia. And in 1946, when our country held its first Soviet ice hockey championship, Bobrov became one of the leaders of the CDKA. He played for the Red and Blue not in all games, but has notched with his hat-trick in the hardest match at the group stage between the Army and the Air Force teams, which the CDKA won 5:3. The next year Bobyor, as he was nicknamed by the fans, led the Army club to its first league victory, scoring a phenomenal 53 (!) goals in 18 games.

Until 1953, this athlete combined his performances in soccer and in Canadian hockey. And in 1952 at the Olympics in Helsinki he was captain of the national soccer team. But soon Vsevolod had to say goodbye to leather ball. Back in 1946 he was seriously injured. After several operations, doctors forbade him to play sports; Vsevolod Mikhailovich was threatened with disability. But he returned to soccer and soon took up hockey. Injury constantly reminded himself, and in 1953 Bobrov decided to leave soccer and concentrate only on hockey.

Bobrov began his hockey career in the same trio with another legendary mentor, Anatoly Tarasov. In January 1950, already being a hockey player in the Air Force team, where Bobrov moved at the invitation of Vassily Stalin, he had to fly to an away game in Chelyabinsk. The night before, Vsevolod asked his brother Boris to set the alarm clock for six in the morning. But his brother had forgotten about the request, and Bobrov had no choice but to go to Chelyabinsk by train. On the way he learned the terrible news: at the Koltsovo airport near Sverdlovsk, the plane Li-2 with eleven hockey players, six crew members, and two attendants crashed during landing.

In 1953 the "pilots" hockey team were disbanded and merged with the CSKA, or Army team. By that time Bobrov was already considered the strongest hockey player in the USSR. He was distinguished by his strong, accurate shot, technique, speed, and amazing tactical thinking. Vsevolod Mikhailovich also had leadership qualities. That's why the coaches entrusted him with a captain's armband on the USSR national team. Thus, Bobrov was the only captain of the soccer (1952) and hockey (1956) Olympic teams in the history of sports. At the victorious Olympics in Cortina d'Ampezzo, Italy, Bobrov became one of the most prolific players, scoring nine goals in seven games.

After his career was over, Vsevolod Bobrov proved himself as a coach. In 1967 he led Spartak team to the USSR championship gold. And in 1972 during the Olympics in Sapporo he was offered the position of head coach of the national team 33 days before the start of the World Championships. In that world championship in Prague the Soviet hockey players lost to the home team, but Bobrov remained in his position and prepared the domestic team for the first-ever Super Series against the Canadian professionals. These games were the peak of Bobrov's coaching career. It was only in the last game that the USSR national team lost the final victory in the opposition to its opponent. Admiring Bobrov's coaching skills, the Canadians awarded him a special gold medal. Over the next two years, our national team won gold at world championships under Vsevolod Mikhailovich's leadership. The more unexpected was Bobrov's dismissal from the national team happened in 1974. After that he still had time to work with soccer teams Kairat and CSKA.

the CSKA Ice Arena is named after Vsevolod Bobrov; the Army team plays its home games there. The Morshansk and Stupino ice arenas and one of the divisions of the Continental Hockey League are also named after him. Domestic hockey players who have scored 250 or more goals in their career are included in the symbolic club of Vsevolod Bobrov.