KHL.ru publishes the changes in the rules that will apply to League games, starting with the season 2022-2023. The changes are associated with deliberate freezing of the puck along the boards, the ability of referees to cancel a major penalty, the choice of faceoff dots by the attacking team, and other aspects of the game. 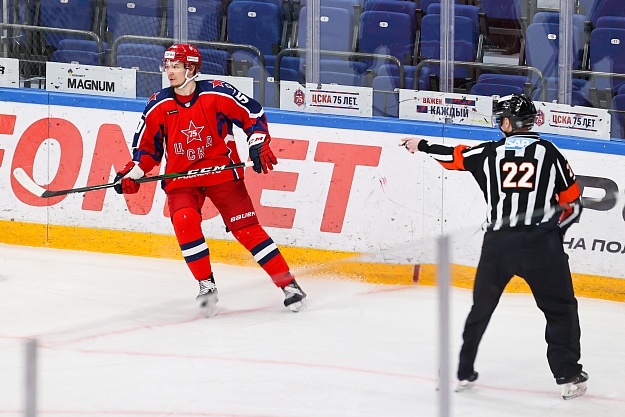 Share
Cancelling a major penalty
In the new season, referees, after video review, will be able to cancel a major penalty if there was no violation of the rules. Previously, if a five-minute penalty was imposed, referees could either increase the penalty or reduce it to two minutes, but not cancel it. Now, referees will have three options after fixing a major penalty and its subsequent review: to confirm the original decision, change it downward, and cancel it.

Faceoff procedures
For the 2022-2023 season, one of the referees’ guidelines will be to deal with blocking at the faceoff circle or behind it, both during its execution and the few moments following. In addition, referees will continue to adhere to last season’s guidelines, such as dealing with handholding and restraining infractions.

Alexei Anisimov, KHL Chief Referee
“In recent years, all of our rule changes have been written in favor of offense and in favor of speeding up the game so that there are as few stoppages as possible. The same criteria guided us when we sent proposals to the working group this year. We made all the changes only after the clubs voted for them. The directors and managers expressed their opinions on various points, and we took their wishes fully into account. For example, the rule concerning the choosing of faceoff dots after the goalkeeper froze the puck and the possibility of the referees cancelling a major penalty were supported unanimously by the clubs. We were the first to introduce these rules in world hockey — here we tried to respect ‘classic hockey’ and increase the dynamics of the game.”

Alexei Ravodin, KHL Referee
"It’s great that the officiating department does this kind of work — the analysis of the game and the implementation of new rules help the most technical players show their skills. I am sure that the dynamics of the game will increase, primarily due to the inability to freeze the puck along the boards. We tried the new rules in training camp and our team was helped by the choosing of the faceoff dots in the offensive zone — we scored three goals out of eight after winning an offensive zone faceoff. All the changes in the rules, as well as their new interpretations, have been thoroughly researched by analysts of the officiating department, which strives every year to improve the game. I think the new changes in the rules will add entertainment, fairness, and goals to our league."

Nikita Novikov, KHL referee
“All the innovations are aimed at increasing the speed of the game — when there are fewer stops, the players do not have time to cool down, increasing the intensity of the game and its spectacularism. The more interesting the hockey is, the more you enjoy your work. Of course, it will take time for referees, players and coaches to adjust to the new rules — that’s why we have preseason tournaments and friendlies. By the start of the regular season everything should be practiced to perfection. I would especially note the rule about freezing the puck near the boards — such situations occur quite often, and from the outside it’s not that exciting. Now these situations will be minimized, and it will help the teams show more beautiful hockey.”