Yaroslav Dyblenko: I want to be useful wherever it's needed

Zvezda
Main page / News /  / Yaroslav Dyblenko: I want to be useful wherever it's needed
1040

Yaroslav Dyblenko: I want to be useful wherever it's needed

CSKA rookie Yaroslav Dyblenko in his interview with KHL.ru talked about his expectations for the debut season with the team, his work under Andrey Nazarov in Sochi and about his level of responsibility in teams that are contenders for the Gagarin Cup. 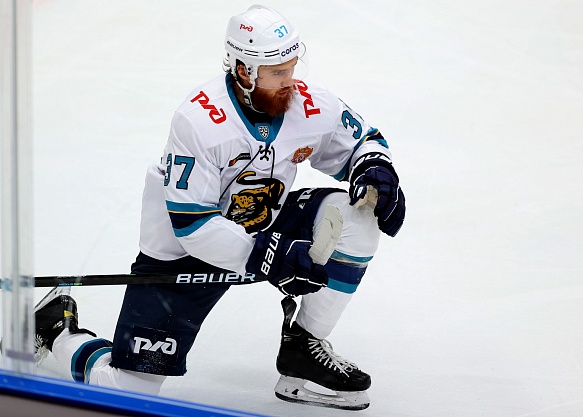 "There will be no problems with adaptation in CSKA"

- You are one of the players, who were invited to the team after CSKA won the Gagarin Cup. Is this a recognition of a certain level?

- It really felt good. We had a lot of conversations, but as a result it happened so quickly that I didn't even expect it. It was probably the fastest contract negotiation in my career.

- Did you already speak to Sergey Fedorov?

- Not yet. I spoke to his assistants, with the team's administrators. Everyone is resting now. When we get together, we'll get to know each other. I think there will be no issues with adaptation in the team.

- Do you like the style in which CSKA plays?

- I saw CSKA's games, I watched the final series. CSKA always plays powerfully. Everyone is trying, there are a lot of skilled hockey players, everyone wants to win. And it is the most important desire. This year, under Sergey Fedorov, CSKA showed interesting hockey. I want to join the team and help it succeed again.

- There are players you know in CSKA. Will it make adaptation easier?

- I always feel at ease in a team. I am not shy, I'm always for companionship. Never mind, with young players or experienced ones. In many teams the players are somehow divided into groups, because of this everything falls apart. It's not my thing to be divided in groups. I hope I will manage to add to the new team. There are much more experienced guys there than me, players who won the Cup. And it's a very hard, emotional journey that makes people grow older. So young CSKA players can teach me something as well (smiles).

"We've already discussed some issues, it's clear what will be required of me"

- The CSKA coaching staff includes Vladimir Chebaturkin, who was your coach in the Atlanta system. Are you looking forward to working with this specialist again?

- Yes, it was with him with whom I spoke on the phone, he said what and how it works in CSKA. When he was the head coach on the Atlanta youth team, I was eighteen years old. We went through a lot together, a lot of good moments at that time. And not just for me, but for the whole team. We remembered something from those times, we laughed. It's been a long time since then, so it will be interesting to work together again. It's good that we've already discussed some issues, it's more or less clear what will be required of me. In two words so far. We'll figure it out as we go along.

- Have you got any specific tasks yet?

- But not yet, but we discussed most of them, for example. CSKA has Nikita Nesterov and Darren Dietz, who are great at playmaking. I also played on the power play in Sochi and was asked if I would be offended if I didn't play on the power play. Of course not! I play everywhere and I would like to be useful wherever it's necessary. We'll see, when the season begins. Moreover, during the championship you often have to adapt and change. There's no such thing as being told "you're only going to stand here and catch pucks" (smiles).

- Did you start preparing for the season?

- I rested for a month without ice, now I'm working on ice and going to the gym. So far, I do everything for my own pleasure. I do whatever I want to do.

- There were lots of young players in the team in Sochi, you were one of the most experienced hockey players. Did you feel, if not a veteran, then an elder comrade to the youth there?

- Yes, I kinda did. Both the management and the coaching staff demanded more responsibility in that sense. The role is a bit different when you're not among your peers. The gap in the team could be quite big, eight or ten years between the guys. So it was necessary to take something into our own hands. I liked such a role, in fact. It was really great. That''s why I wasn't upset that I was traded from SKA to Sochi. On the contrary, I only gained from it.

"Nazarov is great at motivating the team before a game"

- How did the transition to Sochi go last season?

- I am very pleased with the way I was welcomed there. It happens that after the transition, you get a little "twisted," you get kicked out of the team. But with Sochi it happened completely differently. It was a nice season. It was interesting to work under Andrey Nazarov. Everyone knows what an unusual coach he is, popular media and bright. I wanted to know what he was like in real life. To be honest, I was pleasantly surprised. They say all sorts of things about him, I was prepared for one thing, but in fact he turned out all right, a very nice man. In general, I had a good relationship with the coaching staff. For example, with Vadim Khomitsky, the defensive line coach. In general, I liked it a lot in Sochi.

- What is Andrey Nazarov's secret, how did he manage to shake up the team?

- He is very cool in motivating the team before the game, inspiring the idea that there is no team stronger, there is only our team. It really gives you confidence in your own abilities. The coach comes in before the game and says, "We're stronger, we can do it, we'll score! We'll die but we'll do it" (laughs). It's interesting. If it motivated me, it motivated young players even more!

- Sochi played brightly but didn't make the playoffs. What did the team lack?

- I liked that we didn't have boring games. In the season I had injuries, I watched several games from the stands, it was very interesting. The team played fast hockey, with movements. We lacked, probably, some details. During the season, some guys got sick, then others. We waited for two weeks, two more weeks we had to come to our senses, and the games are tight, without any gaps. We failed some part of the season because of that, it was hard without the leaders. But there's also a plus - the other guys, who hadn't been in the lead before, became leaders themselves in this situation, they began to take over the game and score goals. This is important and will definitely help them in the future.

- You've played for teams that were fighting for the playoffs as well as clubs that only had the higher goal. What is the difference between playing for such teams?

- The level of responsibility is different. When you get to the playoffs, your head works a little bit differently. If you played a season and didn't make the playoffs, you don't have that emotional surge. The playoffs are a whole different responsibility. When I played in SKA, there were very requirements. When the playoffs started, people talked about it a lot, created an atmosphere of cup games, you understood how serious everything was.

- Does this pressure not bother you?

- Sure, some people in such conditions are a little afraid, but for some people, on the contrary, they grow wings and try to give everything to become a champion. It's important to get the kind of guys on the team who are ready to fight. Those who can handle such pressure become real stars. People do some incredible things in the playoffs. For example, Maxim Sorkin, a young guy, what was his emotional surge? He scored goals, scored points, he was very useful in the playoffs.