Vladislav Provolnev: I saw the Gagarin Cup win in my childhood in a dream

Zvezda
Main page / News /  / Vladislav Provolnev: I saw the Gagarin Cup win in my childhood in a dream
695

Vladislav Provolnev: I saw the Gagarin Cup win in my childhood in a dream

In an exclusive interview with RIA "Voronezh" Vladislav told how he tried his hand at the NHL and that he dreams of bringing the Gagarin Cup to his hometown as often as possible. 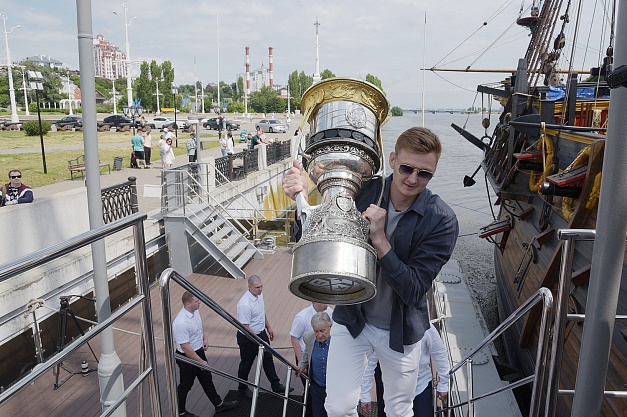 – Your father, a well–known Voronezh sports commentator Igor Provolnev, was a successful football player in his youth. And how did you end up in hockey?

– I attended kindergarten, and hockey coach Sergey Menshikov went to groups, recruiting boys for his classes. He offered the simplest tests: to jump in length, somersault and do something else. I looked at how I did it, and told me to come with my parents. I came, walked around for a couple of days, and somehow it didn't really seem good to me. Father says: "Then you'll go to football." He took me to football, which I absolutely did not like, and then I returned to hockey.

– How do you remember your first coach?

– Sergey Nikolaevich Menshikov is an excellent psychologist, he found an approach to every boy, without shouting and noise. His most valuable lesson is not to give up in difficult situations and go to the end, to achieve his goal.

– Why did you become a defender, because all the boys usually rush to someone else's goal to score goals themselves?

– We had a tournament in Moscow, in one of the matches we played against Dynamo Moscow. After that, the Dynamo coach came up to us and invited us to his team. My parents, without hesitation, abandoned everything and went with me to Moscow. It have been January 2, I think, everyone still had a holiday, and we were going on the road with our things.

– How did the coach react to your departure?

– Not really good at first... But then I probably realized that I have much more prospects for development there than at home.

"I consider myself a Voronezh citizen!"

– Did you spend a lot of time at Dynamo? After all, it turned out to be some kind of intermediate option.

– I played there for about 4 years, then I moved to Spartak and graduated from the Spartak school.

– Do you consider yourself more of a Voronezh, Dynamo or Spartak player today?

– If I brought the Gagarin Cup to my hometown, then, of course, Voronezh! And then, probably, a "Spartacist", since I graduated from this particular school. It was in Spartak that I made my KHL debut.

– I left Dynamo and immediately moved to Spartak. Coach Alexey Tkachuk took me to the team, and then I worked at the Spartak school. And then I went to play in Zelenograd in the MHL "B" club, and from there I returned to the MHL "A" youth team.

– Those years were not easy for Spartak. They say that due to lack of money, fans almost collected money for the team for uniforms and clubs...

– Yes, it was like this: there were no clubs, there was nothing to play with, the sponsor of the team seems to have gone bankrupt. And the fans donated money, bought clubs for the players themselves. In such conditions, all the guys fought for the club like crazy! And it happened so that we won the Kharlamov Cup thanks to strong will. (The Kharlamov Cup is a hockey prize awarded to the winner of the playoff series of the Youth Hockey League championship, starting from the 2009-2010 season, – approx. RIA "Voronezh").

– Do you remember your first match in the KHL in the form of Spartak?

- Of course. We played against Avangard Omsk, it was November 21, 2015. Wasn't the best play. I made a mistake a couple of times at the beginning, then cleaned up after myself and more or less joined the game normally.

– Did you consult with your first coach Sergey Menshikov then?

– I started calling him myself and asking about certain episodes of the match played, he prompted me, helped me.

– Yes, I was bought out by Cherepovets Severstal. This is a good club, and there was something to prove.

– Next season, you set a personal performance record by scoring 20 points (10+10) in 48 matches using the 0 "goal+pass" system with a +6 utility score ("Plus or minus", which is also often called a utility score, reflects the difference between the pucks thrown and missed by the team at a time when one or another player was on the ice, – approx. RIA "Voronezh"). What did it mean to you?

– I think this is an indicator of my serious attitude to the matter, the coaching staff trusted me completely, and it's always worth a lot! In Cherepovets, the team enjoys tremendous support from fans, even now, when I am already a player of another club, they write to me a lot on social networks, and when I won the Gagarin Cup as part of CSKA, hundreds of congratulations came to me from Cherepovets.

"My cheeks hurt from smiling all day"

– Did it not work out for you in the NHL? After all, you signed a contract with the Arizona Coyotes club in the spring of 2021, for which you subsequently did not play a single match. Played for its farm club, playing a league below.

– I don't regret at all that I went there, got tremendous experience both in hockey and in everyday life. In the NHL, I played five friendly matches during the preseason. The coach said that I was staying on the team, but then some kind of incomprehensible situation developed, and I went to the AHL to the farm club of Arizona. I will say that hockey is probably faster overseas than in Russia. I played there and then decided to return home to the KHL. Moreover, CSKA immediately offered me a contract, which I immediately signed. The head coach Sergey Fedorov calmed me down, said, that I will adapt and everything will be fine. The strength of my current club is in the team, in a single fist. Even during the difficult final series against Metallurg Magnitogorsk, during which we lost 1:3, we talked to each other in the locker room and decided that the team had no other way than to fight to the end. And in the end we won.

– When was the turning point in that episode?

– Exactly when we were losing 1:3. Then we won in overtime, which, as it seemed to me, broke the opponent. When it became clear that the Gagarin Cup was ours, I just threw the stick on the ice and thought: "Thank God that it's all over!" In fact, these are indescribable emotions that can only be dreamed of. By the way, I really dreamed about them as a child – that I would someday win the Gagarin Cup. These moments were the happiest in my life. After this victory, I walked around smiling all day, even my cheeks hurt from a constant smile.

– Who was the first to congratulate you on your victory?

– Wife Nastya (we got married in 2021). By the way, many wives of our players came to Magnitogorsk for the decisive match of this series. And how they got there is a separate story! There was no direct flight from Moscow to Magnitogorsk, they flew to Chelyabinsk, and from Chelyabinsk to Magnitogorsk they got by bus, almost 300 km. My father was also happy as a child, called me right away, congratulated me. He actually criticizes me more often than he praises me.

– Did someone congratulate you from Voronezh?

– Of course, my first coach Sergey Menshikov immediately called, then the guys with whom I started playing, relatives, grandfather, too. Emotions are amazing today, after all, the first pupil of Voronezh hockey brought the Gagarin Cup to his hometown! Today I signed autographs for about an hour, the boys came up and took pictures with me. We stopped by my grandfather's house, he tried to lift the Cup, but then said that his arm hurt, and did not continue these attempts.

– And as a child, whose autograph did you dream of getting?

– When I was still in Voronezh, I went to the tournament in Moscow, Alexander Ovechkin came to us then, we stood in line for autographs, took pictures next to him. It was an event!

– Do you visit your hometown often?

– The last time I was in Voronezh, probably three years ago. Alas, it doesn't always work out.

– Do you follow the fate of Buran and Fakel, who rose to the Russian football elite?

– Periodically. A lot of my friends have played in Buran at different times. I would like to congratulate the players, this is, of course, a huge success!

– What are you dreaming about now?

– Do not stop there, but continue to move forward. I hope that next year I will bring the Gagarin Cup to Voronezh again. I will work and prove that I can get into the Russian national team. And I want to wish young hockey players to love this sport, to rejoice in training, and not to suffer there – to absorb something new coming from the coach.