Vitaly Abramov: Before the season, I set myself the goal of winning the Gagarin Cup

Zvezda
Main page / News /  / Vitaly Abramov: Before the season, I set myself the goal of winning the Gagarin Cup
782

Vitaly Abramov: Before the season, I set myself the goal of winning the Gagarin Cup

Interview with RB Sport with CSKA striker Vitaly Abramov – about the debut season in the KHL, the exchange from Tractor and winning the Gagarin Cup. 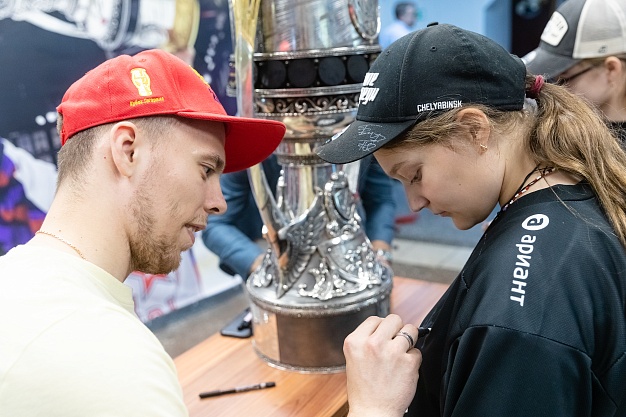 – In the offseason, in an interview, you promised to win the Gagarin Cup and bring it to your native Chelyabinsk. As a result, it turned out so, but with another team…

– The main thing is that I promised, set myself such a goal before the season. As you can see, we managed to win the Gagarin Cup and bring it to Chelyabinsk.

– Your debut season in the KHL turned out to be just incredible for you: returning to your hometown club, exchanging in the middle of the championship, comeback in the final, winning the Gagarin Cup…

– The season seemed to be divided into two parts. After the exchange from Traktor to CSKA, there was a pause due to covid, we went through the second preseason. An atypical season, of course. But I am happy that our team was able to achieve the championship.

– Will the finale be remembered for a lifetime? We managed to win back from 1-3 in the series.

– The whole playoffs turned out to be difficult for CSKA. Lokomotiv beat 4-0 in the series, but it was very difficult, there were even four overtimes in one match. Then Dynamo passed. They were loosing against SKA 2-3 in the series, were on the verge. And won with 1-3 in the final series – not all teams are capable of it. Therefore, CSKA is with the Gagarin Cup.

– What did the coaches tell you so inspiring after the fourth match of the final?

– Despite the fact that we lost 1-3 in the series, there was still confidence in our abilities inside. We just talked to each other in the team. Everyone considered the defeat in the fourth match unfair, went to Magnitogorsk and "took" the game in overtime. I think that match was decisive. After that, there was a feeling that we could win the series.

– Sergey Fedorov was able to prove that he is not only a great player, but also a strong coach?

– He is a very strong coach. He has a flair – how to drag links, to whom to put whom. Sergey Viktorovich understands hockey. He is an outstanding professional and knows what to do. Of course, he has a lot of authority in the team.

– And it is no coincidence that he was given an award as the best coach of the KHL season.

– The fact that the team won the Cup is a weighty argument in order to receive an award for the best coach.

– Did Alexander Popov's performance at CSKA impress everyone?

– It's incredible to be the fastest player at 41! After the match, we look at the KHL statistics on average speed, and Popov's is 38 km / h! He inspired others by his example. Absolutely deservedly, Alexander Popov received the prize for the most valuable player of the playoffs. He was just the best in the team. He has a lot of experience, which he shared with others, prompted a lot – both on and off the ice. In the final match, he scored the winning goal while playing with an injury.

– From the outside, he seems to be a loner.

– I would not say that he is a loner. He just doesn't like to give interviews. In the team, he is absolutely open, you can always turn to him for some advice.

– He is a leader in the locker room – he talked a lot, charged the team with positive emotions. Thanks to players like Sergey, we did not give up the series twice in the playoffs, being on the verge.

– How did you perceive his transfer to Lokomotiv?

– This is hockey. No one is immune from a team change. We will continue to play without him.

– In your debut season in the KHL, how hard was it for you to switch from North American hockey to Russian hockey?

– I didn't come out of the preseason in the best shape, but then I managed to "fit" it. Hockey, of course, is different. The platforms are different, the tactics are different. It took some time to adapt, but by the middle of the season we managed to roll in and everything was fine.

– Was the exchange from Tractor in the middle of the season a shock? Who reported it then?

– I wouldn't say it was a shock. I have been through an exchange more than once in my career – both in the junior league and in the NHL from Columbus to Ottawa. Ivan Anatolyevich (Savin, General Director of Tractor – note by "RB Sport") called to him and said that an exchange had taken place. With Anvar Rafailovich (Gatiyatulin, head coach of Tractor – note by "RB Sport") also talked with me. And then at night I flew to Moscow. I took it well and calmly went to another team. I was lucky that there was an Olympic break, so I could easily adapt to CSKA. We trained for two months, and everything was fine in the playoffs.

– Has anyone called or written from overseas this season?

– In "Ottawa" they congratulated me on winning the Gagarin Cup – and that's it. There were no more contacts.

– Have you thought about returning overseas in a year, after the end of your contract in the KHL?

– I'm thinking now only about CSKA and the new season in the KHL.

– The Gagarin Cup turned out to be a good wedding gift for you.

– Yes, it's great that the Gagarin Cup came to our wedding.

– How long have you met Galina?

– We've known each other for a long time. She inspires me to do everything. My main motivator is to move forward and win Cups. She was always with me wherever I played – in North America and in Russia.