On Saturday, the army team is waiting for fans on the square in front of the CSKA ARENA. 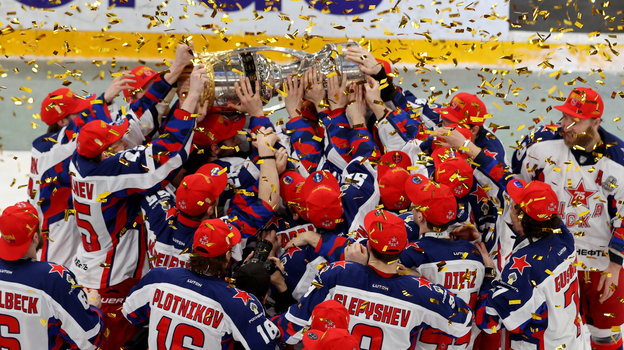 On April 30, in Magnitogorsk, CSKA won the Gagarin Cup and became a four-time champion of Russia and a two-time winner of the KHL main trophy. Do not forget about the 32 victories in the USSR championships. However, the team did not have time to celebrate the success together with the fans. The players and coaches have gone on vacation. Except for those who were awarded individual prizes by the league. Let us recall that the best head of the club last season was recognized by the president of the PHC CSKA Igor Esmantovich, the best coach — Sergey Fedorov, the best goalkeeper — Ivan Fedotov. He and defender Nikita Nesterov entered the symbolic team of the championship stars and received "Golden Helmets".

We have preserved the backbone of the championship team

The Gagarin Cup was awarded to its owners right on the ice of the Metallurg Arena after the final siren of the seventh match of the final series. At the same time, the prize for the most valuable player of the playoffs was given to CSKA veteran forward Alexander Popov. He himself was at the doctor's office at that moment, so the statue was delivered to him in the locker room. It was Popov who scored the golden goal from Andrey Svetlakov's miracle pass. By the way, the club is ready to make an offer to the 41-year-old forward, he himself wants to continue his career, if, of course, his health allows. In the meantime, Alexander is recovering from a serious lower body injury sustained in the final.

And Svetlakov, in the status of a restricted free agent, was one of the first to extend his contract with his native club. And in general, the CSKA decided not to look for reinforcement on the side, but to keep the championship squad. Recently, the forwards Sergey Plotnikov, Vladislav Kamenev and Anton Slepyshev, who spent many matches with the captain's stripe, extended their agreements with the club for two years. The striker Vitaly Abramov remained in the team, who tried on an CSKA uniform after being exchanged from Tractor during the last season. As well as defenders Nesterov and Darren Dietz. The first of them signed a contract for as many as four seasons. In 2020, he was going to extend his relationship with CSKA for five years, but for personal reasons he had to go overseas to Calgary. His return last summer to the team, where he won the Gagarin Cup and a year later once again won the gold medals of the Russian championship, turned out to be triumphant. Nesterov spent the last season steadily and solidly, won silver at the Beijing Olympics and put it in the Gagarin Cup.

Among the newcomers, it is worth paying attention to the experienced defender Yaroslav Dyblenko, who was invited to the national team a few years ago, as well as goalkeeper Anton Todykov with experience playing in Vityaz. The 29-year-old Swedish defensive player Fredrik Klasson, who has 170 NHL games under his belt, has agreed a one-year contract with CSKA. This is what President Esmantovich had in mind when talking about the breeding campaign at a press conference following the results of last season in the first decade of May.

And goalkeeper Alexander Sharychenkov and striker Maxim Mamin, who joined the team, are not strangers to it at all. Mamin played three times in the playoff finals, scored goals twice. If his goal in the seventh match of the series with Metallurg in 2016 did not bring the Gagarin Cup to the army, then in 2019 he scored a golden puck thrown at the gates of Avangard in Balashikha. Last season, Mamin played very well in the NHL for Florida, scoring 14 points (7+7) in 40 regular season matches and four Stanley Cup matches. Despite the new offer from "Florida", the pupil of the CSKA decided to return to his homeland, signing a contract with CSKA for three years. This transfer can be a good example for young players and perfectly illustrates the strategy of the army club, which has been returning its students to Russia for many years and helping them reach a new level. Sharychenkov, in the 2020/21 season, successfully replaced the Swede Lars Johansson in the regular season, his success was appreciated in Ufa, and he spent last season at Salavat Yulaev, gaining invaluable cup experience.

The coaching staff was strengthened by Igor Kravchuk, a full holder of Olympic awards, who managed to play for three national teams (USSR, CIS and Russia). Moreover, he won gold medals in Calgary-1988 and Albertville-1992, being a CSKA team. In the 1991/92 season, before leaving for Chicago, Kravchuk wore the captain's letter. He went down in history as the last captain of the "Red Machine" (at the 1991 Canada Cup).

The cup will be presented by Tretyak

Next Monday, the champions will begin preparing for the title defense, they will train in Moscow for two weeks, and from August 5 to August 19 they will hold a training camp in Minsk, where two test matches are scheduled — with local Dynamo (August 14, 12.00) and Admiral (August 19). On the 23rd, the CSKA team at the CSKA Arena will fight with Spartak (13.00). And the last test before the start of the championship-2022/23 — the match on September 1 for the Opening Cup with the finalist of the playoffs "Metallurg" - will be the traditional Cup of the Mayor of Moscow, in which the army will meet with "Dynamo" (August 25, 18.00), "Cupid" (August 26, 14.00) and with an opponent from another group ("Spartak", "Vityaz" or "Kunlun Red Star").

Fans can get more detailed information firsthand from the players, coaches and managers of the championship club on Saturday, July 23. If they come to the celebration of champions, which will take place on Valery Kharlamov Square in front of CSKA Arena. It is also a great opportunity to meet with your favorite team, chat with players and coaches and remember the bright moments of the triumphant season together.

The organizers of the event took care of the interests of the fans, many of whom will probably want to watch a football match in the CSKA — Sochi RPL, which will begin at the VEB Arena at 15.00 and end in two hours. Therefore, the celebration of hockey players starts at 18.40. There is enough time to get from the 3rd Sandy Street to the Park of Legends and catch the presentation of the Russian Champions Cup to the team. Fans will be waiting from 17.15. Entry is free.

The team will receive the cup from the hands of the President of the RIHF and a member of the Supervisory Board of the PHC CSKA Vladislav Tretyak in the presence of representatives of the general sponsor of the club PJSC NK Rosneft. The cooperation of the most titled club in the world with Rosneft has been going on for almost 11 years. During this time, the Moscow CSKA team regained their leading positions in domestic hockey, became champions of Russia four times, won the Gagarin Cup twice and won silver medals of the championship three times.

The Murzilki International band was invited to conduct the ceremony with Mikhail Zakharov, the press attache of the national team at the Sochi 2014 Olympics, as part of it. Participants and guests will be entertained by musicians Polina Gagarina and Sergey Galanin. By the way, meteorologists promise a wonderful evening on Saturday.