Kirill Dolzhenkov: in the summer i focused on mobility and speed

Zvezda
Main page / News /  / Kirill Dolzhenkov: in the summer i focused on mobility and speed
851

Kirill Dolzhenkov: in the summer i focused on mobility and speed

The forward of the CSKA system has improved his agility and speed over the summer and is now preparing for his second season in the JHL. 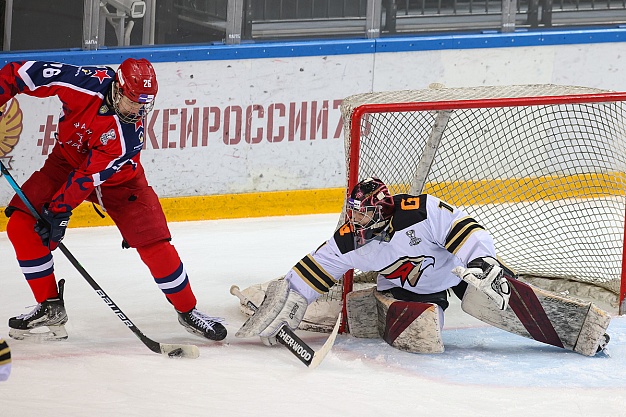 Share
CSKA forward Kirill Dolzhenkov (born in 2004) made his Junior Hockey League debut in the 2021/2022 season. The player of Krasnaya Armiya stands out for his size: 198/90. In 33 games of the regular season, Kirill scored 14 goals and was credited with 14 assists. In the playoffs, the forward helped Krasnaya Armiya reach the Kharlamov Cup finals, but the six-game series was won by SKA-1946. The forward scored three goals and was credited with five assists in 19 playoff games.
In an interview with the official website of the League, the forward of Moscow team talked about the lacrosse-style goal, pre-season training camp, summer holidays, secrets of successful learning and his debut year in the JHL.

– You played a game against Stalnye Lisy on July 27. Was it hard to play after loads?
– Loads are still there. The technique is affected a little, muscles are sore, but willingness to work is the main thing. We defeated them 5-4, we all did our best.

– What conclusion did you make about your conditioning?
– I have been working hard at the training camp for all three weeks. I think I’ve improved my conditioning. Now I need to be ready for the start of the upcoming season.

– Is pre-season training camp the most exhausting period for a hockey player?
– Yes, it is. Well, sometimes there are segments during the season when you are to face tough opponents one after another. It also takes a lot of energy.

– What are your favorite and least favourite drills?
– No one likes running and performing the Cooper test. And gym is the easiest thing.

– Why don't hockey players like running?
– Hockey is an all-round sport. It is not about simply running – your hands and head must work too. We play sports, and running by itself is boring.

– What training regimen does the team have? What cycles of training program have you already completed?
– First cycles involved training sessions without skating. We worked out in the gym, played basketball, handball, soccer. Then the loads were increased: we were performing running exercises, fartlek (cycle training from anaerobic sprinting to aerobic walking or jogging - note), having ice practices and increasing weights in the gym.

– You must be second to none in basketball.
– No, why? I am just as good at playing basketball as everybody else.

– Did you perform the Cooper test?
– Not this year. It was substituted with shuttle runs. We performed the Cooper test last season, but coaches pulled it from the program. The shuttle run test is a bit easier. We are to cover 12x24 meters in one minute.

– Did you do well on your first attempt?
– We had three attempts. I did well on the second one.

–It is not your first pre-season training camp. Did you get used to the loads quickly?
– Yes. My first training camp with the JHL team was tougher. Now we are adjusted and used to training sessions. The pre-season becomes easier, especially when we start skating. We are working on tactics. We still have intensive training sessions, but we pay more attention to game plan and different aspects of the game. In general, everything is pretty much the same as it was last season.

– Did you quickly adjust to playing games after practicing off the ice?
– We played scrimmage games during practices. It helped us to adjust and made it easier to play against Stalnye Lisy.

“Hockey is path number one, but education shall not be ignored”

– Did you manage to take a break from hockey over the summer?
–I went to the Russian Junior Club Championship after the playoffs. After that, I was resting from hockey for three weeks, and in June I started preparing for the season.

– How did you spend your vacation?
– I travelled around Russia, visited many beautiful places. Spent time with my family and friends. I also completed a session at college, progressed to the second year of study. I pursue a degree in sports management.

– Did you pass your exams easily?
– Yes, I did. I knew the material well and passed everything easily. I was receiving copies of lectures during the season, I was studying topics, making notes.

– Sports management is not only about sport, but also about economics.
– I chose this faculty because I graduated from school with A’s and only one B. I scored high on the Unified State Exam: 98 points in Russian language, 92 points in English, 74 points in specialized mathematics. That was why I picked such a complicated specialty.

– How did you manage to balance hockey with school when you were a child?
– I was spending evenings and sometimes nights doing my homework. Of course, my school was quite forthcoming. Mom and dad helped me with finding tutors. I had extra classes, so I didn’t fall behind with my studies.

– You were a responsible pupil.
– Hockey is path number one, but education shall not be ignored. I wanted to score high on the Unified State Exam to be able to make it into a good college. I was pursuing two goals at the same time: I was developing as a hockey player and getting a decent education.

– What have you learned during your first year of college?
– We’ve been taught fundamentals, basic things. We did not delve into the specialty and did not study anything extremely interesting.

– Are you happy with your first JHL season?
– I was making good progress during the season. I did pretty well in playoffs. But it was still hard. Higher speeds, older guys. I was adjusting during the months of September and October. I’d say it was a good season. My team finished second - a decent result.

– What helped you make that progress?
– I started working on my conditioning. Had extra training sessions. It helped me a lot. Plus, I got adjusted, got used to speeds and style of playing. JHL hockey is faster compared to what is played at school. You are to make faster decisions.

– Did coaches find a spot you felt comfortable with right away?
– The coaches tried various combinations. Lines were changing as the season progressed. Things started clicking by October. But I was to leave for the national team, so they were looking for new line combos.

– You had 14 goals and 14 assists in the regular season. Can it be said that you enjoy both scoring goals and making passes?
– I think so. I derive enjoyment from both assisting and scoring goals. When I was with sports school, for instance, I had more goals than assists.

– Did you manage to improve your individual skills over the summer?
– I was focusing on my agility and speed. With a size like mine, you have to be fast. I worked on strength, paid attention to speed powerskating and worked out in a gym. Skating skills are laid in childhood, but there are elements that can be improved - for example, curves and turns.

– Were you growing out of clothes too fast?
– I was growing up little by little. It wasn’t like becoming 20 centimeters taller in one year.

– We have figured out your strengths. And what difficulties do you undergo because of your height?
– Smaller players are more agile on the ice. It makes things harder for me. Like with everything else, there are pros and cons. The main thing is to be able to take advantage of your strengths.

“Scoring lacrosse-style goals is not possible without practicing”

– What went wrong in the Kharlamov Cup finals against SKA-1946?
– To be honest, it’s hard to tell now. All the guys were battling with a huge desire to win. At some point, the odds were against us and it led to the result we had.

– How long did it take you to get over the defeat in the finals?
– Long enough. I was thinking about it, analyzing episodes. Reaching the finals and then loosing hurts badly. But eventually it is all forgotten. I realized that it is still a decent result. Yes, we finished second, but we got invaluable experience of playoff hockey and finals.

– What is that experience about?
– In playoffs you play elimination games. In the regular season, the intensity of emotions is different. Playoff games are full of fights, battles for every centimeter of the ice. Games are more spectacular for fans, as they see teams battling hard in all zones.

– Is the level of responsibility lower during the regular season?
– I would not say so. It’s just that you are not at risk of being eliminated and ending up the season.

– And do you have it in mind in playoffs? It doesn’t do any good, does it?
– It doesn’t do any harm. You just feel more responsible, try to do things right, sometimes play simple. The whole team becomes angrier and more determined.

– Just a few days ago you played agains Stalnye Lisy – an Eastern Conference team. Would you like to play more games against clubs from the East?
– For me, there is no difference what team to play against. The main thing is to go out on the ice and enjoy the game. It is difficult to understand if hockey in the West differs from hockey in the East based on several games of playoff semi-finals.

– Teams do not have much time for practicing during the season. What do you focus on during sessions?
– Tactics, powerplay. We don’t have heavy loads on the ice. We work on game plan. These are things we focus on starting from the pre-season and we improve certain components during the season in order to bring them to perfection for the playoffs.

– You scored a lacrosse-style goal in the 2021/2022 season. Is it technically challenging?
– Not really, you just need to practice. And, of course, you need some luck too. You have to be fortunate enough to be able to score such goals: you need to be behind the net and get some free space. In any case, scoring lacrosse-style goals is not possible without practicing. That’s what I sometimes work on.

– Aren’t goalies mad that the puck might hit them in the mask?
– No. Everyone feels okay about it. Offensive creativity is a plus.