KHL.ru concludes reviewing the 2021-2022 season for the league’s 24 teams. Today is the champions’ turn: in the summer, CSKA changed head coach, and Sergei Fedorov led the Muscovites to their second Gagarin Cup triumph in his debut season. 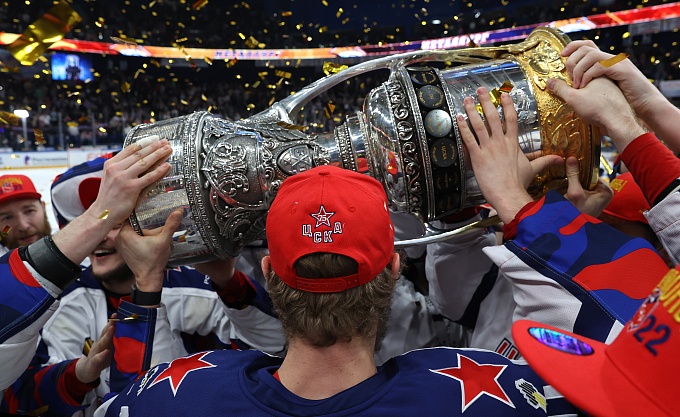 Share
Although at first there was a lot of talk about Fedorov’s lack of coaching experience — saying that he had never worked as a head coach before his appointment to CSKA, and this could become a problem for the club. However, Fedorov responded to all the critics with dignity, winning the Gagarin Cup on his first attempt and being awarded as the league’s best coach. That said, there was trouble — just remember the opening Cup loss to Avangard (0-4) or defeats to Severstal (0-3), Kunlun Red Star (1-2), and Amur (1-5). Olympics should also be mentioned, as there both CSKA players and head coach took part: The tournament was a significant physical and mental burden as all of them were under serious physical and mental stress in the tournament. But the Muscovites made the playoffs as a finely-tuned mechanism that worked without a hitch.

Take, for example, the first two series, when CSKA faced Lokomotiv, then Dynamo Moscow: both the Railwaymen and the Blue-and-Whites created problems for Fedorov’s team, which they quickly and correctly responded to. As a result, they won two straight lossless series in the playoffs. Next up was SKA; CSKA had a tougher time against them, but when they were down 2-3 in the series, they managed to save the situation and qualify for the finals in the seventh game. In the grand final with Metallurg, they had to play tougher heroics, when with the score 1-3, many people rushed to give the Cup to Ilya Vorobyov’s team. Fedorov and his guys were against, won three straight games (the first one in OT) and deservedly became champions.

Best players
Ivan Fedotov
48 GP, 30 W, 92.8%, GAA 1.93
Fedotov was one of the main contributors to CSKA’s triumph in the Gagarin Cup. In the playoffs, he posted the best saves percentage (93.7%) and the second-best goals-against average (1.85). And that after he played the Olympics from start to finish, helping the Russian team reach the finals! The CSKA netminder had a crazy workload this season, and he handled it well, earning the title of top goalie of the season as a bonus to the Gagarin Cup.


Konstantin Okulov
65 games, 50 (15+35) points, +18
The CSKA’s offensive leader had a very solid season, knocking in 50 or more points for the second year in a row. Okulov was good in the playoffs as well, becoming the fourth leading scorer (17 points) and second sniper (8 goals) in the elimination stage, also finishing in the top 3 in goals differential (plus-11). At the turn of the series with SKA and Metallurg, he had a five-game scoring streak, and in the seventh game of the finals he posted a 1+1.


Nikita Nesterov
63 games, 44 (8+36) points, +22
Nesterov was the team’s top passer and posted the best differential in the team, being equally useful at both ends of the ice. Nesterov had the most productive season of his KHL career. It’s also important to underline that at a critical moment for the team, he showed leadership — he orchestrated the game-winners in the fifth and sixth games of the finals against Magnitka.


Head coach
Sergey Fedorov took over from Igor Nikitin as head coach of CSKA last July. He was extremely restrained on the bench during games and when talking to reporters, even when the score was 1-3 in the series against Metallurg, he exuded confidence in public. Winning the Cup at first attempt is quite a feat, and to do it the way Fedorov did was twice as valuable. The fans also remembered him for his non-trivial and daring decisions: For example, together with Evgeny Koreshkov, he came up with the idea of pulling the goalie in 3×3 overtime, and the audience loved it.

Best game
There is a stereotype that the seventh game of the finals is always a super close game that ends in a 1-0 victory for one of the teams. CSKA acted as a myth-breaker this year, confidently outplaying Metallurg in the most coveted game: Pavel Karnaukhov and Alexander Popov each scored in less than a minute, and Okulov later converted a quick counterattack. Philipe Maillet’s goal seemed to revive the intrigue almost gone from this game, but Vladislav Kamenev’s tally on an empty net finally sealed CSKA’s triumph in the Gagarin Cup.

Young guns
Last season, nine players under the age of 23 played for CSKA. Three of them — Nikolai Makarov, Lev Komissarov, and Nikita Rtishchev — played 10 or fewer games each. Roman Kalinichenko (12 games), Vladimir Grudinin (13 games), and Prokhor Poltapov (18 games) played a little more, but it’s hard to call them full-time, first-squad players. However, three of them were fully involved in CSKA’s game this season: Maxim Sorkin (62 games, 13+10), Matvei Guskov (39 games, 3+5), and Takhir Mingachyov (45 games, 2+3). If the coaching staff continues to trust these guys, they could shine even brighter in the new season.